Remember the good old days when TV was the center of all family interaction and all the most desired electronic devices on the market were meant to be connected to it? Well, times have changed. Nowadays television is no longer the hub of the home, and in many ways it is quite astonished, although some companies want to change that.

One thing has not changed, however: the stresses that happen when two people want to see different things on TV and if you, like me, have only one television at home, this is a high-powered problem.

Well, if your interest is playing, a Sony resource has the potential to save your sanity and good relationships with your family members or housemates. I'm talking, of course, about Remote Play, a feature that debuted a few years ago exclusively for the ill-fated PS Vita, then expanded to the Japanese company's smartphones and tablets, and finally, in the first half of this year, reached Macs and PCs.

I spent the last few weeks with a Playstation 4 with the main purpose of testing Remote Play, and then I will answer the question that doesn?t want to shut up: d to dispense with the TV and start playing only on your computer screen?

Sony already earns points initially for creating a very simple setup scheme, which can be done by anyone without the minimum of technical knowledge. The first step, of course, is to download the Remote Play utility on your computer for Macs, it is compatible with OS X Yosemite / El Capitan and macOS Sierra; the complete list of system requirements can be read here.

With the PS4 turned on and connected to the same Wi-Fi network as the computer, just activate the option "Enable Remote Use" within the "Connection Settings for Remote Use" menu, in the console settings. Then, just open the program, connect the DualShock 4 to the Mac / PC using the USB cable used to recharge it and press the key "Options" in control for the application to start searching consoles next. Once detected, the connection is made automatically and the video game screen appears as if it were a magic trick on your computer.

In my case, this search has always worked very well and the PlayStation was detected in a few seconds; if the program insists on not finding your console or you are on a different Wi-Fi network, it is possible to generate a code on the video game screen (in the option "Add device", also within the menu "Connection settings for Remote Use") then just click on the option "Register manually" , in the application, to enter the code and establish the connection without major problems.

The app's preferences don't offer many options, but the essentials are there: in addition to the basics of connecting / disconnecting your PlayStation Network account and choosing whether to be able to use the computer keyboard in games, you can choose the transmission resolution (360p, 540p, 720p and 1080p) and the frame rate (standard or high in this second case, the start recording feature is disabled during remote use, for some reason).

These quality settings are extremely important in trying to establish a minimally usable transmission. Which brings us to the most important point

Obviously, no type of simple initial configuration or effective configuration option will do any good if the performance of the feature falls short. And, unfortunately, the news I have in this regard is not the most encouraging: in my tests, at least, Remote Play at the it performed satisfactorily enough to be considered minimally usable.

Before getting into the details of Remote Play performance, allow me an addendum: I have a Wii U (and I like it a lot, you don't need to laugh at me). Therefore, I am used to turning off the TV and playing video games directly from another screen (in this case, the control). Of course, we are talking about different things the connection of the Wii U with the gamepad different from Remote Play and if I distance myself more than 5 meters from the console, the transmission fails and falls. The fact: I got used to an absolutely stable and fail-safe transmission, and anything other than that, I know, profoundly affects anyone's experience of using it.

I am saying all this to illustrate the need, during a gambling session, to obtain a transmission that is, above all, stable even more important than resolution in this task, for example. And at this point Remote Play sins, and a lot: every time I tried to play on the Mac it became an exercise in frustration, with an absolutely unstable, low-resolution transmission that invariably falls off after a few minutes at most.

You can suggest that this problem is caused by my home network, but it is not the case: when the computer and PlayStation are in the same room, connected to the same Wi-Fi network, Remote Play does not depend on the upload and download speeds of the internet plan the router itself is in charge of establishing a proper connection between the two devices, in this case.

Anyway, I tried to take the Mac to another environment and connect it to another Wi-Fi network to see if things improved, but nothing was done: initially the quality of the streaming it even seemed to improve, but soon everything degredolated again, the image started to show freezes and then the connection fell as a whole. Overall, at no point in my experience with Remote Play was it possible to play anything with the TV off for more than a minute, which is quite discouraging.

I'll be short and thick: Remote Play, at least with me, just * did * not work. If you are looking to buy a console and are in doubt between a PlayStation 4 and an Xbox One, for example, do not let this feature become dominant in your choice (obviously I am not implying here that the PS4 is inferior to its main competitor in fact, in general terms, I think just the opposite), as it is simply not reliable. 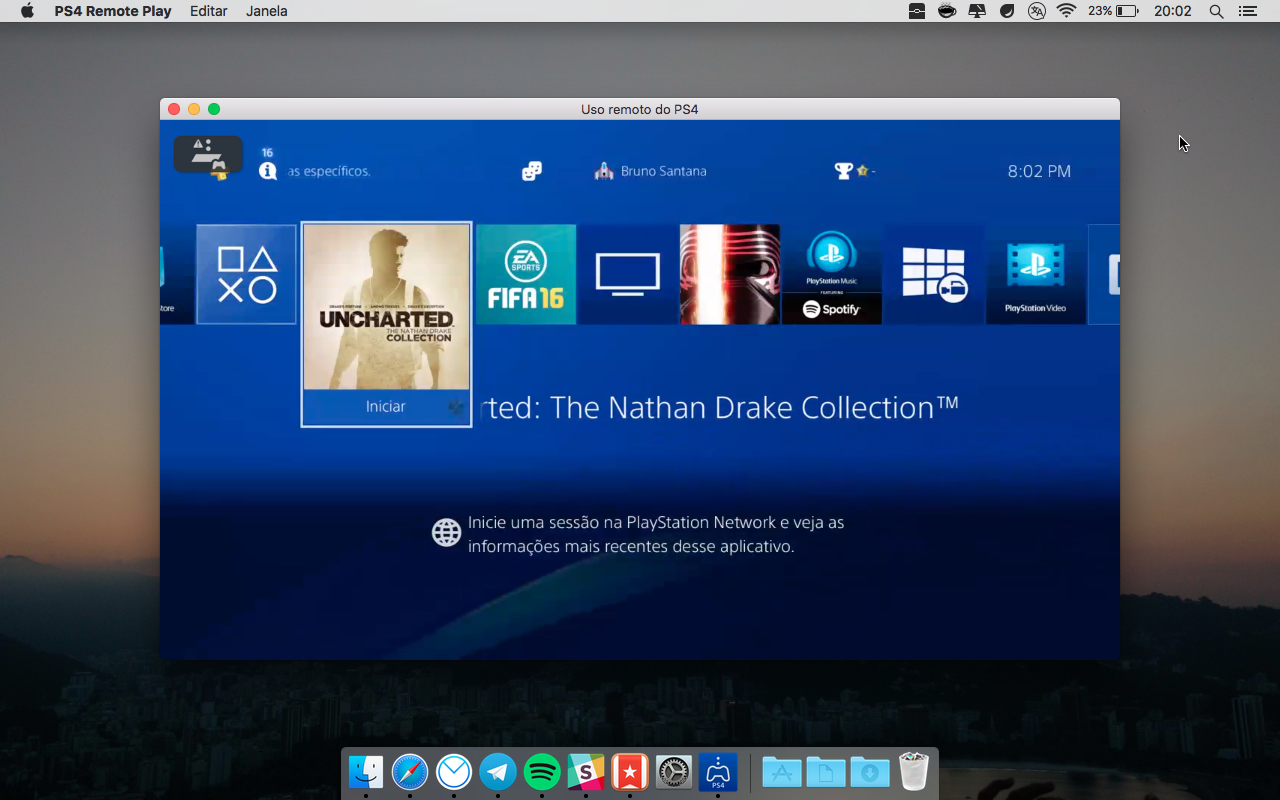 On the other hand, if you already own a PS4, testing Remote Play with your own hands will not take away: it costs absolutely nothing, the utility is light, does not take up space on the computer and the configuration is very simple. Who knows, you may not end up having better results than mine

How was the opening of Apple Union Square, the company's newest store in San Francisco! [atualizado]