Instagram flop accounts are a trend in the photo network among teenagers. They bring spaces dedicated to the discussion of various topics: from memes to youtubers, through gun control, feminism, immigration and LGBTQ issues. The profiles are administered collectively, almost always by teenagers between 13 and 18 years old.

Fashion emerged in the United States and has been growing mainly there, where the migration of young people from Facebook to Instagram has been observed in several studies. Find out more about the new phenomenon and see how to identify a flop profile on the social network.

The name "flop" is directly related to the literal meaning of the expression: failure, in English. Originally, the profiles were created to mock people of great notoriety on the Internet, such as celebrities and famous digital influencers, opening up their flaws. A racist comment from a blogger, a homophobic subject or a singer being arrogant with someone are just examples of what appears in those accounts.

"The content centered around things that we find factually or morally wrong, and that's how we criticize them. Today, for example, I posted a flop of a lady who was mocking someone for being homeless. That's a horrible thing to do" , Taylor, a 15-year-old who manages a flop account, explained to The Atlantic.

The main topics covered are political issues. The President of the United States, Donald Trump, one of the centers of the debates, as well as social issues. As the idea of ??posting "flaws", a pattern is observed: conservative profiles publish content on topics such as feminism, Black Lives Matter ("Black Lives Matter") and LGBT rights, for example, while accounts run by liberals point to problematic conservative behavior.

However, a flop account does not always have a unique political orientation. Sometimes administrators have divergent opinions, as in @toomanyflops_, according to Hal, one of the names behind the profile. "Some of us are pre-life, some are pre-chosen, some are transgender, some are religious, some are atheists … As account managers, we always try to engage in dialogue and promote conversation," he told The Atlantic .

To identify who is saying what, the posts are identified with an emoji, each assigned to an administrator. The caption is usually in the account bio, and will change as members enter and leave the "community".

But flops don't even live on thorny subjects. There is also space for pure and simple entertainment, as in the case of accounts created by fandoms. In this category are the profiles that discuss the Musical.ly app, YouTube or TV series. There are also the so-called IRL flops (acronym for "In Real Life", or "in real life"), in which people recount situations with wrong things that happened outside the Internet.

According to the report by The Atlantic, many young people reported that flop accounts are a space to discuss issues that interest them freely, away from the eyes of parents, teachers or other authority figures. "Teenagers want a way out to express their opinions with the same kind of conviction that they may not be able to express at home or elsewhere in their lives," said Hal, who is 17.

Another great motivation is in the description of this public with the traditional press vehicles. Respondents said they did not believe what they read in the news, saw on TV or were even taught in the classroom. For them, the contents of the flop profiles are more reliable because they can be collected and discussed collectively.

This belief opens the door for the proliferation of fake news. Administrators claim that they remove content when they realize it is false information, as long as they have verified this with their own methods. Even with the negative sides of the flops, the professor of media studies at the University of Virginia, Siva Vaidhyanathan, sees the phenomenon with good eyes: "if young people are becoming more politically engaged because of this, even better". 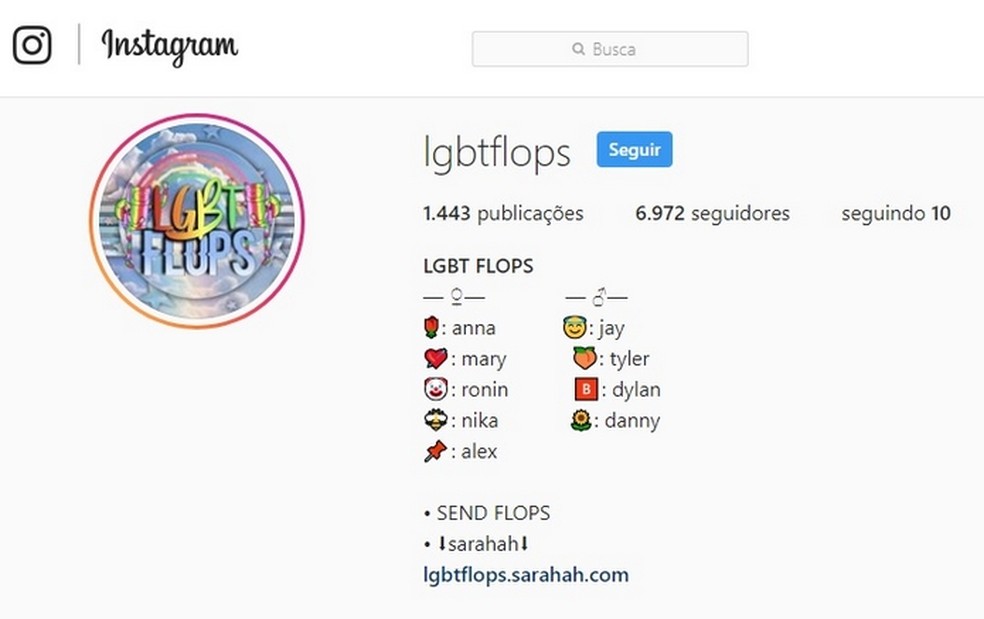 In Brazil, the fashion of flop accounts hasn't caught on yet. The Portuguese pages with the term do not seem to have the same idea explained above, bringing the notion of flop more as a synonym for page or profile that has no content or many followers. Following hashtags such as #flop, #flops and their derivatives, what you see are publications by American teenagers.

Supposed Brazilian flop accounts have no posts or a lot of movement Photo: Reproduo / Instagram

Apple releases trailer for “The Cash Money Story: Before Anythang”, an exclusive documentary for Apple Music

Ideas, publications and research actions on COVID-19 are brought together in a new Government portal