If you like to watch things online, you might seek recommendations. So, check out here the best Netflix series, the most watched series in 2019 or the best Netflix movies in 2019. If you prefer, we have now created this article of the best Japanese anime!

If you are interested in animations, read on and check the synopses of each one and choose what to see right now!

The word anime comes from Japanese and means animation, that is, all types of animated media. It commonly refers to animations originating in Japan or based on this type of art.

As much as this media format comes from Japan, today it can be created and produced outside the country. As great examples of this, we have Avatar: The Last Air Master, the Marvel X-Men Anime series and the Iron Man Anime.

We start our list with one that is not yet officially available; That will change on March 13, when Netflix will have Beastars for you to watch.

It takes place in a society of anthropomorphic animals, where there is a tension between carnivores and herbivores. At a school and high school, a gray wolf falls in love with a small white rabbit. Follow the link to watch on Netflix, one of the best sites for watching movies and shows. 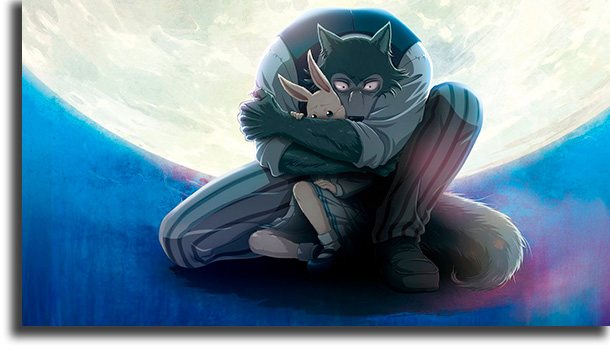 Gurren Lagann, a 27 episode anime, directed by Hiroyuki Imaishi and written by Kazuki Nakashima, another of the best Japanese anime.

It takes place in a distinct society, where humans are forced to live underground. In it, a couple of friends decide to escape from this situation, but when they reach the surface they face countless enemies. It is also available on Netflix, where you can watch movies and series online!

Follows Shinji, a teenager forced to command a battle mecha to defend his world, as he is the only one capable of doing so. Follow the link to watch!

Based on a manga of the same name by Osamu Tezuka, Dororo is a 2019 anime and is not the first adaptation of the manga, however much that really worked.

In it, a samurai lord is losing his lands and, in an attempt to save them, sells his unborn child to demons. However, this son survives and, together with Dororo, hunts and kills each one. the only one on the list that can be watched on Amazon Prime Video.

A manga written and illustrated by Hirohiko Araki, Jojo?s Bizarre Adventure became an anime in 2011. The manga currently has 8 parts, while the anime finished its fifth.

Follows the history of the Joestar family, all with supernatural powers. From the third part on, the powers are personified, becoming stronger and stronger. The parties take place over centuries. Follow the link to Crunchyroll, the best of apps for watching anime. 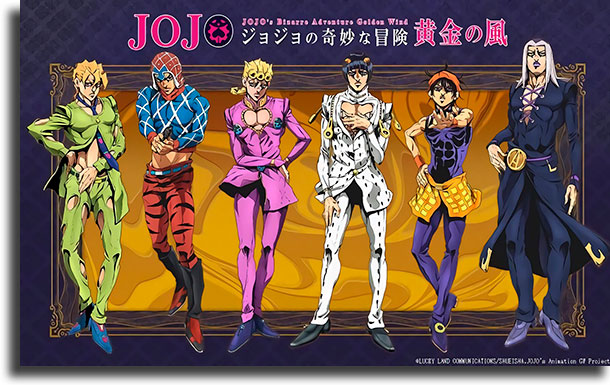 Demon Slayer, originally a manga written and illustrated by Koyoharu Gotge. It was adapted for anime in September 2019, with a movie and a second season already scheduled.

Follow Tanjiro, a young man who becomes a demon hunter when he returns home and finds that his entire family, with the exception of his sister, had been killed by one. However, she becomes a demon. Go to the Crunchyroll to see!

Another of the best Japanese anime Akame ga Kill !, which is based on a manga created by Takahiro and illustrated by Tetsuya Tashiro. It was written by Makoto Uezu and directed by Tomoki Kobayashi.

Follow Tatsumi, a young man who travels capital to save money for his home, but discovers strong corruption in the area. A murderous group recruits him to fight the Imprio. It is available on both CrunchyRollquantona Netflix, which has one of the best apps for watching movies and series.

The second adaptation of the manga Fullmetal Alchemist, this version was directed by Yasuhiro Irie and written by Hiroshi nogi, being more faithful to the original material.

Here are two brothers who lost everything when trying to revive their mother. One of them lost his body, while the other an arm and a leg. Now they are looking for the Philosopher's Stone to recover their bodies. Follow Netflix or Crunchyroll, both excellent streaming services, to see!

Adapted from a manga of the same name, Black Lagoon directed and written by Sunao Katabuchi. It was produced by Madhouse, Geneon Entertainment and Shogakukan.

In Thailand is the city of Roanapur, depraved and taken over by crimes. In that city, Rokurou Okajima, an honest businessman kidnapped by a group of mercenaries and decides to join them. Check it out right now on Netflix, where you can also watch shows!

One-Punch Man became a giant phenomenon when he left, being an excellent anime and manga. It was released in 2015 and produced by Madhouse.

Follow Saitama, a hero who works in the profession just for fun. He can defeat any enemy with just one punch and is always after someone who challenges him. Watch on Netflixouno Crunchyroll, two of the best streaming services.

11. The Rising of the Shield Hero

The Rising of the Shield Hero is based on a light novel by Aneko Yusagi. The anime came out in 2019, having been produced by Kinema Citrus and directed by Takao Abo.

Iwatani Naofumi follows, a young man who finds a book that transports him to another world. He becomes the Hero of the Shield and must face the Waves of Catastrophe alongside the Four Cardinal Heroes. The anime is available on Crunchyroll.

Another one of the best Japanese anime One Piece, adapted from the manga of the same name by Eiichiro Oda. It is also known for being one of the longest animes of all time.

Follow the adventures of Monkey D. Luffy, a young man who gains rubber properties after eating the Devil's Fruit. He, along with his pirate crew. travels behind the treasure known only to One Piece. The anime is available on Crunchyroll.

Anyone who likes to watch anime, needs to know Mob Psycho 100, which is based on a manga written and illustrated by ONE.

Follow Kageyama ?Mob? Shigeo, a young man with powers of telepathy who does everything to suppress them in order to lead a normal life, even if he is always in trouble. Go to the Crunchyroll to see.

14. Code Geass: Lelouch of the Rebellion

We also have Code Geass: Lelouch of the Rebellion on our list, an anime produced by Sunrise, directed by Gor Taniguchi and written by Ichir kouchi.

Follows exiled prince Lelouch Lamperouge, a student who obtains the power of absolute obedience from a mysterious woman, C.C. Using this power leads a rebellion against Britain, which dominates Japan. It is available on Netflix, one of the best streaming services available.

A manga illustrated and written by Khei Horikoshi, My Hero Academia was adapted for anime by the Bones studio, having been originally released in 2016, but which is still on the air today.

Follow Izuku Midoriya, a young man without superpowers (Peculiarities, in this universe), in a world where 80% of the population has them. Still, he dreams of being a hero and chosen by hero number 1 to be his successor. Follow the link to watch right now. 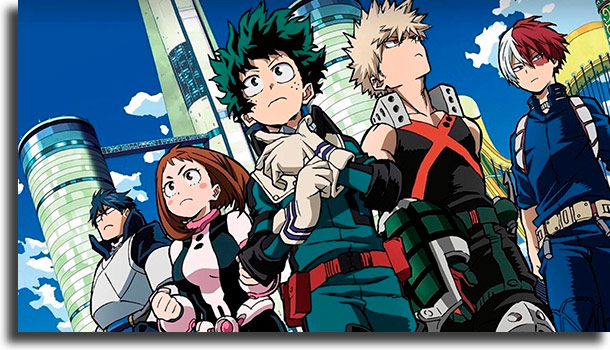 Gintama is another of the best Japanese anime, based on a manga written and illustrated by Hideaki Sorachi. The anime aired from 2006 to 2010.

It takes place in the Edo era, which was conquered by aliens. They prohibit the use of swords, causing Gintoki Sakata, a samurai, to be forced to work on other things to survive.

Hunter Hunter, originally a manga written and illustrated by Yoshihiro Togashi. It was adapted for anime in 1999, being produced by Nippon Animation and directed by Kazuhiro Furuhashi.

Follows a young boy who discovers that his father is a famous hunter. He embarks on a journey of following in his footsteps, becoming a Hunter as well and meeting many others.

Originating in a manga written and illustrated by Yki Tabata, Black Clover became an anime in 2017, produced by Xebec Zwei.

Follows Asta, a young boy who was born with no apparent power, something unknown in the world in which he lives. Accompanied by the magicians of the Black Bulls, he plans to become the next Wizard King. It is available on Crunchyroll

19. That Time I Got Reincarnated as a Slime

A light novel written by Fuse and illustrated by Mitz Vah, That Time I Got Reincarnated as a Slime became an anime in 2019, animated by Eight Bit and directed by Yasuhito Kikuchi. It already has a second season planned, as it is in our anime guide 2020.

Follow Satoru Mikami, a corporate employee who has no problem with his mountain life. However, he stabs and hears voices in his head, giving commands. Now, reincarnate as a Slime in an unknown world. Click the link to watch!

Produced by Trigger, Kill la Kill is one of the best Japanese anime, being directed by Hiroyuki Imaishi and written by Kazuki Nakashima, both responsible for Gurren Lagann.

He follows Ryuko Matoi in his search for why he killed his father. This leads her into violent conflicts with Satsuki Kiryuin, the Honnouji Academy's school board president, as well as her mother's fashion empire. It is available on both Netflix and Crunchyroll. 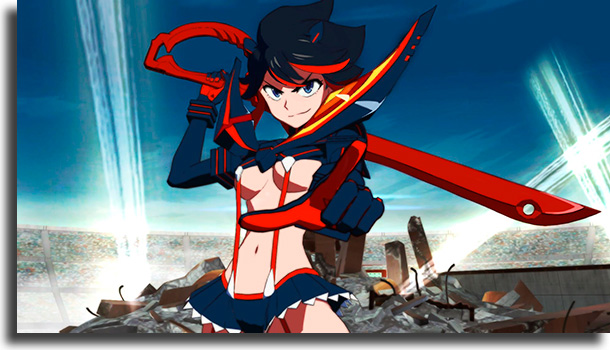 A manga illustrated and written by Kentaro Miura, Berserk became anime in 1997, being one of the best known of all time.

Follow Guts, a solitary mercenary who is bound to be chased by demons until he dies. However, he does everything to avoid this terrible fate, joining a disorganized group for that.

Written and illustrated by Kazue Kat, Blue Exorcist was originally a mang. In 2011 it became anime and in 2017 its second season was released.

Follow Rin Okumura, a teenager who discovers that he and his twin brother are sons of Sat, born to a human woman, and that he will inherit Sat's powers. He joins an organization to become an exorcist and defeat his father .

It appeared as a light novel by Yukito Ayatsuji and released in 2009, and in 2012 the anime was released.

It takes place in 1972 and focuses on Kichi Sakakibara who was transferred to the Yomiyama school. He finds himself in a mystery where everyone in his class ends up dying horrible deaths and tries to get to the bottom of it. Watch on Crunchyroll.

No list of the best Japanese anime would be complete without Hellsing Ultimate, animated by Satelight, Madhouse and Graphinica and produced by Geneon.

Follow the mysterious and secretive Hellsing Organization as you battle supernatural monsters like vampires, ghouls and Nazi vampires.

Finally, we have My Roommate is a Cat, which was among the best anime of 2019. Originally, it was a manga of the same name written by Minatsuki and illustrated by Asu Futatsuya.

It follows Mikazuki Subaru, a lonely writer who, after the death of his parents, ends up finding and adopting an abandoned cat. Mixing the perspectives of the two, the extremely cute anime and a good lesson in how to care for cats. 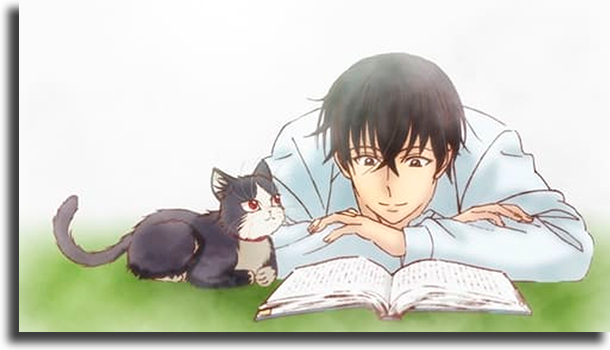 And, what did you think of our list of the best Japanese anime?

Leave in the comments your opinion about the ones I include, saying if you think we forgot any. Also, be sure to check out our Netflix series launch guide in 2020, the most popular Netflix series and Netflix 2020 movie releases, in addition to the best Netflix series.

Jessica Alba is another star who joins the “Planet of the Apps” series, produced by Apple

Do you already know the new Facebook? It is very easy to change