For a while, I was finding my Mac at many times slow in an inexplicable way. Even with the 10.13.1 update for macOS High Sierra, it still had an unusual instability.

Behold, after some analysis at different times, I discovered at Activity Monitor (app located inside the / Applications / Utilities / folder) a process identified as core that was eating up all my CPU and a lot of memory, too. 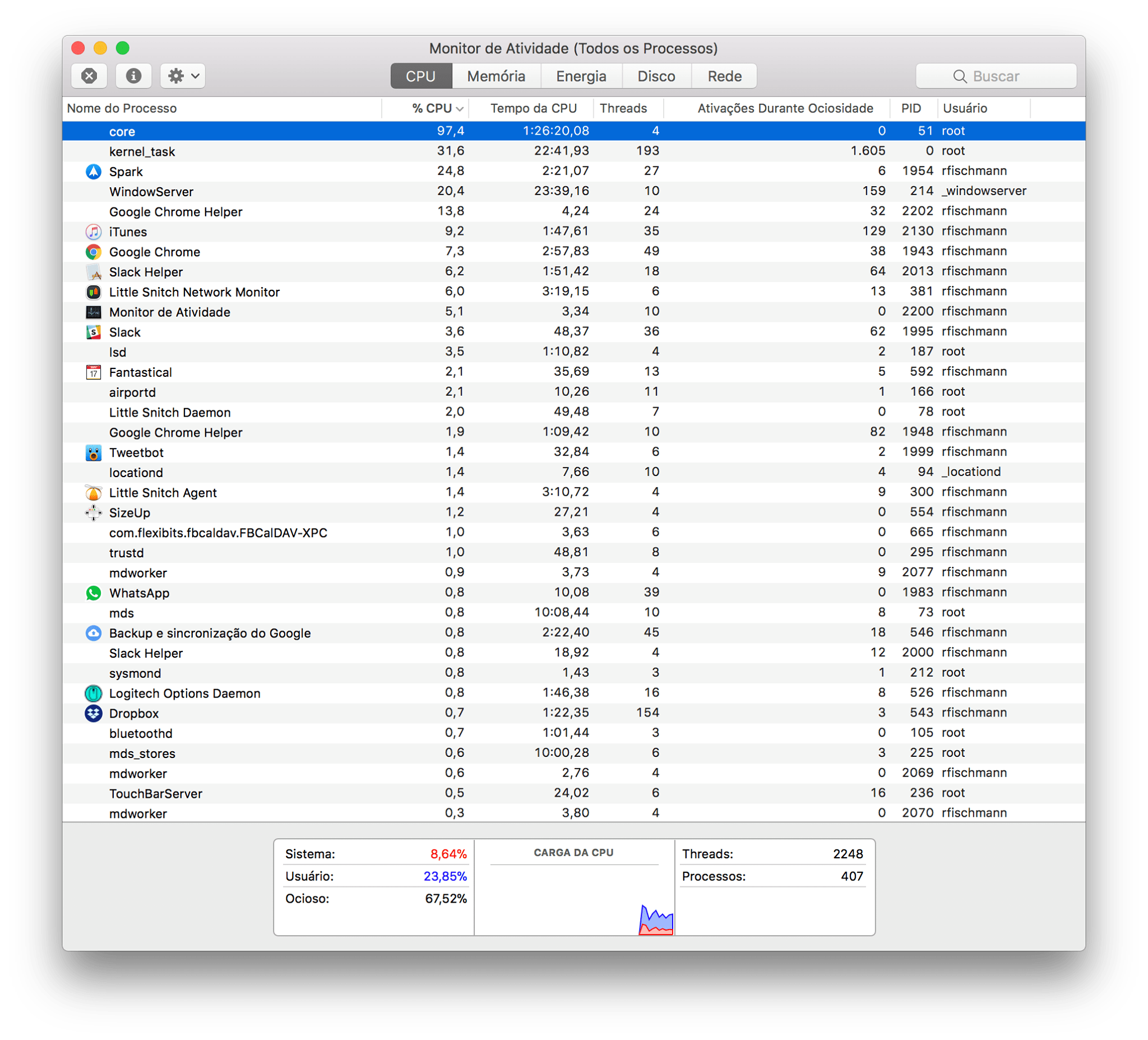 At first, even by the name of the process, I thought it was something native to macOS that had some absurd flaw. But no, nothing native.

After a deeper investigation, I discovered that this core process is actually part of the "Security Module" that Banco do Brasil adopted after abandoning Java for its internet banking. Yeah, and me here celebrating goodbye to Java

BB's ?Security Module? is what other banks call ?Guardio?, for example. it is basically the same software used by Ita, CAIXA and other national banks to provide such a layer of mandatory security in accessing our bank accounts.

Ladies and gentlemen, my Mac another after I killed that process. Next, you'll know how to do that, too.

If you have already installed one of these ?Security Modules? on your Mac, know that it automatically runs and runs in the background, on the system, whenever you turn on your machine.

The first step in this tutorial, then, is to eliminate that automatic launcher. 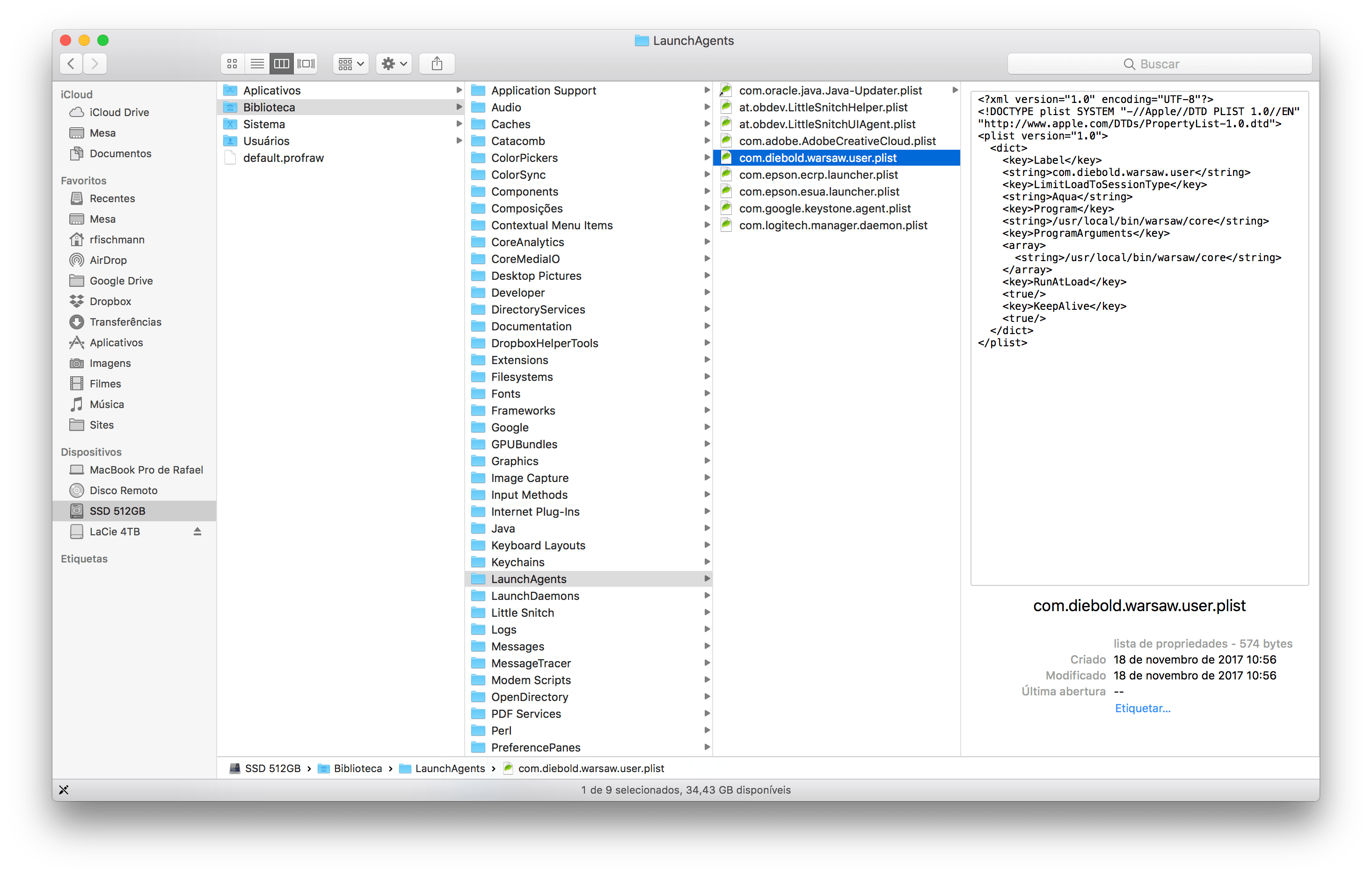 To do this, open the Finder and go to the folder / Library / LaunchAgents /, at the root of your main drive.

There, among other miscellaneous files (depends on what other software you have installed on your machine), you will find a call com.diebold.warsaw.user.plist. Throw that file away. Erase it. Eliminate it. Zuna with him!

Now, we will need our good old command line. To do this, open the app Terminal located in the / Applications / Utilities / folder on your Mac.

Copy and paste the following line of code and press Enter:

The system will probably ask for your administrator password. Type it in and press Enter again.

There, in a few seconds, if you look again at the Activity Monitor, the core process should disappear and your Mac's performance will return to normal.

And when do I really want to access internet banking?

Very simple, dear Padawan. In the same way, open the Terminal and type:

Note that the command is the same as the other, we just changed the word unload for load.

When you log out of the bank, don't forget to kill the process again.

If you happen to have installed one of these ?Security Modules? by mistake, or maybe you use it very rarely on your Mac (after all, the mobile apps of these banks today work very well, thanks), the ideal same uninstall it completely.

To do this, open the Terminal and type:

Then, just restart your Mac.

To Brazilian banks, here is our ear for offering a security solution as precarious as this. This is unacceptable!

At least in the case of BB, the abandonment of access via Java occurred a long time ago and, I think, these problems with ?Warsaw? (developed by GAS Tecnologia, of the Diebold group) only started a few weeks ago. I can't say for sure if it was an update to the ?Security Module? or perhaps a conflict with recent versions of macOS, but the thing is ugly and affects many people as I learned.

In a quick search by Google, I also found cases of people who suffer from it since 2014 (!), And in the Windows world; this one, also with Mac, from mid 2015. That is, it may not be as recent a problem as I initially imagined. And I'm not even going to get into the real security implications of the user of this solution

We have waited years for the abandonment of Java. I never imagined that I would face this kind of problem without him, too ?

Movavi – Get to know the application for video editing

How does Hangouts work? Meet Google's tool for video calls | Audio and Video