Earlier this year, we published a tutorial on how to create shortcuts to replace words on iPad, iPhone, or iPod touch. They are great, practical and very helpful.

On that occasion, in the middle of the text, we said the following:

Shortcuts created by you on one device will be synced across all. For example, if you have an iPhone, an iPad and a Mac, when you create a shortcut on the iPhone it will automatically sync with your iPad and your Mac (on macOS, you can view, add and edit the shortcuts at System Preferences Keyboard Text).

This synchronization, however, is not very reliable there. So if you want to ensure that you keep your shortcuts intact, you can invest a little to purchase apps specific to this task.

Well then. The problem with such synchronization was not reliable at the time, because the resource used an archaic method, and not the most recent and modern one. framework CloudKit. 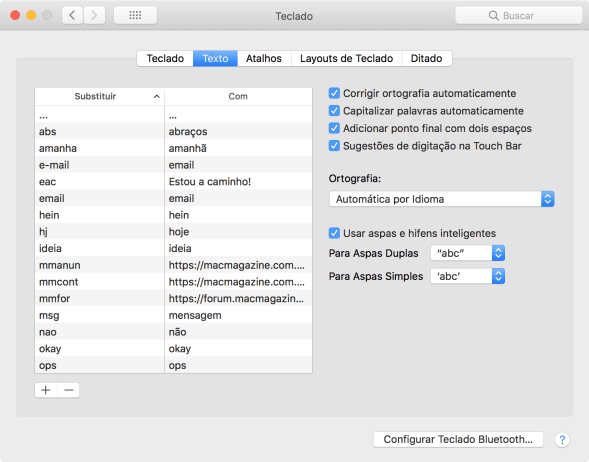 The news of the week, released by Daring Fireball, that Apple seems to have finally turned that key around, and now text replacement shortcuts are properly synchronized between iOS and macOS via CloudKit.

I never had any major problems with the feature, but in fact some things didn't sync properly before. In some tests carried out now, it is evident that this has improved a lot. I just add a new shortcut on the Mac and it immediately appears on the iPhone, and vice versa. Edu, however, is not so lucky but I must say that he is facing other weird bugs there too, which have nothing to do with this functionality.

O Cult of Mac complemented the news with another good news that came to the resource: support for multiple line replacements, such as a complete address. That's great!

And take rumors: MacBook Air will use SanDisk SSD, according to Lazard Capital analyst

Movie of the week: Buy “The Lobster”, with Colin Farrell and Rachel Weisz, for $ 3!