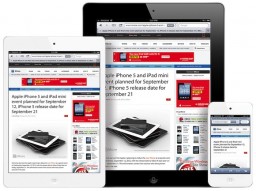 Despite rumors about the production problems of ?iPad mini? screens, the China Economic News Service claimed that Taiwanese AU Optronics, which manufactures LCD panels and other products, managed to solve the problems in the production of screens for ?iPad mini?, encouraging Apple to increase its initial order from 2 to 3 million units.

This shipment may come into effect in mid-October, in time for the event that is due to take place on the 23rd. About 5 million screens are expected to be produced during the current quarter.

Video: check out our iPhone 7 Plus “unboxing”!

What is the best credit card? Compare all with the IQ360 | Internet

How to turn videos into online GIFs for free | Images