We already talked a little about Fusion Drive, the combination of HDD storage with the speed of SSDs that Apple is selling with the new iMacs and Macs mini. Always remember that the optional feature only machines purchased through the Apple Online Store can be customized with it.

Dave Hamilton of The Mac Observer, decided to analyze this Fusion Drive a little more and shared interesting information. While the Mac mini has the option of Fusion Drive with 1TB only in the top-of-the-line model, iMacs can be configured with 1TB and 3TB, with the exception of the more basic 21.5-inch model. In all of these, Apple places a 128GB SSD, with the rest of the storage being HDDs. The cool thing is that it is not a simple RAID, since OS X has an important participation in all this. Fusion Drive analyzes which applications and files you use the most and throws them into the SSD, which is faster than the HDD; Of course, the opposite is also true: less used files and apps are played inside the HDD.

It is also not about cache (temporary storage of a particular file for easy access). Usually the cache it implies that the data is duplicated, the original is on the HDD and mirrored to the SSD, facilitating access, which does not happen on Fusion Drive. The Disk Utility (Disk Utility) sees two physical disks, but the operating system merges them, presenting the user with a single layer at the top. Showing only one disk to the user, it is clear that OS X manages the files, cutting the possibility of you playing with what is inside the SSD and what is in the HDD. For those who do not have much intimacy with the optimal system, besides not disturbing the backup made with Time Machine, for example. 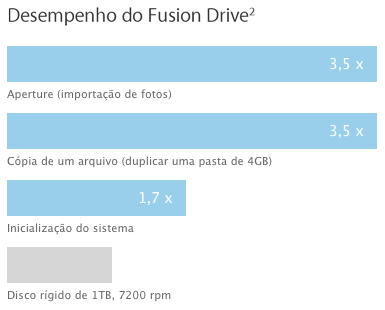 Another cool thing about Fusion Drive: all writing operations (data entry, write) of the system are stored first on the SSD and, if OS X understands that that particular file must be directed to the HDD, it performs the task. With that, we have a great gain in the speed of the operations, since the SSD is much faster.

If by chance your Fusion Drive dies, Apple has indicated that there is nothing special (or very different) about them. In theory, we are fully capable of exchanging parts for solutions from other companies. Everything should work, but of course Apple will no longer support it.

Similar solutions already exist in the market, but I think that this is the first that integrates perfectly with OS X, I could not expect less, after all, Apple who controls the hadrware and software of its products. Taking into account that the thing must have been well implemented by her, this feature has everything to be very, very promising!

In case he wanted to better understand how everything works, Lee Hutchinson wrote a beautiful article a little more technical on the subject that is worth checking out. Finally, Apple posted a FAQ (Frequently Asked Questions, or frequently asked questions) on the subject quite focused on what can / cannot be done with a Fusion Drive. He is not yet available in Portuguese, but he should soon paint the translation there.

(via MacRumors, The Loop)

New Macs Pro would be on the way, with USB 3.0 and faster FireWire; iMacs would come soon after

Drake "responds" to Taylor Swift going down at the gym, in new Apple Music commercial