A few months ago, we talked here about a meeting of Apple and other technology companies with the U.S. government to discuss possible ways to curb the spread of the infamous. false news (fake news) is one of the major concerns of the current information age that has even influenced the direction of entire countries and elections around the world.

Now, it seems that Ma is starting to take the first steps to curb this kind of deceptive and / or sensational content. 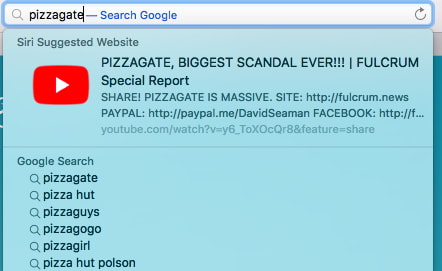 The first one of the company in this sense has to do with the resource Siri's Suggestions, of Safari which suggests the most relevant content based on what you type in your browser?s search bar, including YouTube videos, iTunes Store media, or Wikipedia articles. Over the past few days, several links deemed questionable, with false news or conspiracy theories already proven to be unfounded, have been removed from the tool.

The measure comes after a report from the BuzzFeed News, which indicated that Siri's Suggestions feature was bringing out (and reinforcing the popularity of) various videos or articles of dubious quality, addressing irresponsibly, sensationally or lying matters ranging from Holocaust denial to the so-called Pizzagate (conspiracy theory already denied that involved the Democratic Party during the 2016 presidential elections in the USA), going through anti-vaccine content or even extolling white supremacy movements.

All examples offered by the report were removed from the tool by Apple, which issued the following statement:

Suggestions from Siri websites come from the Internet and we offer curatorship to avoid recommending inappropriate websites. We also remove any inappropriate suggestions when we recognize them, as we did with those. We will continue to work to provide only quality results and users can inform us of suggestions they deem inappropriate at applebot@apple.com.

Still according to the BuzzFeed, the dubious results generated by Safari are the result of a ?data vacuum? around certain search items, that is, if a keyword or term does not bring natural informative results that can be interpreted by the browser, it takes sites or content random or many visualizations (as these sensational pages tend to be) without analyzing their degree of reliability or quality.

Combining this with countermeasures and fake news on the News platform, Apple already seems to have a very clear idea of ??how to (begin to) combat the danger of harmful content on the Internet. If that's enough, we'll have to wait and see.