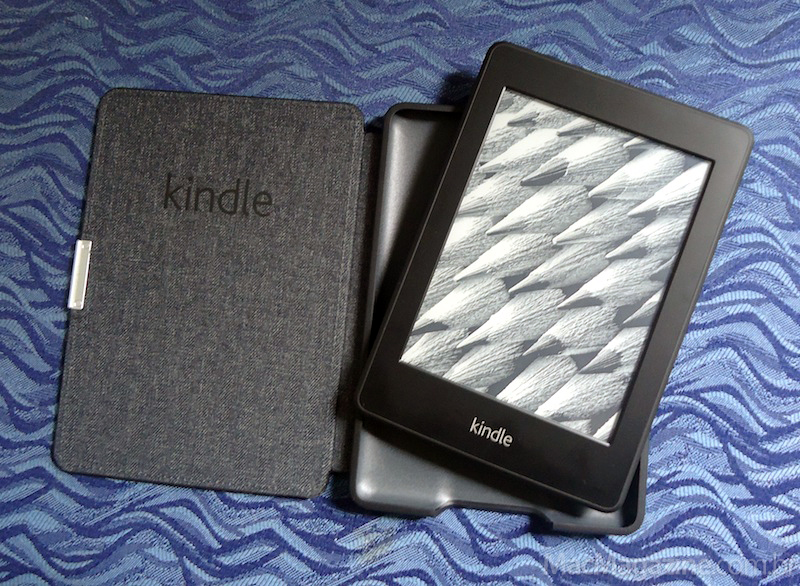 Six months. Six months after the launch of the Kindle Paperwhite in the United States, Amazon finally found a place in her heart to bring its new ereader to the Brazilian market. Available at Livraria da Vila stores and also at Pontofrio.com (as well as at special kiosks in shopping malls in Rio de Janeiro and So Paulo), the device arrived costing R $ 480 in its Wi-Fi version only, and R $ 700 in the back side with free Wi-Fi and 3G.

Having fallen in love with the Kindle Touch, released in 2011, I was looking forward to getting my hands on Paperwhite as soon as possible. A week after finally having him with me, the question remains: was it worth the wait? The answer is not very simple, but I will try to present it.

I won't waste your time: for sure, anyone interested in Paperwhite is already up to their knees with basic information about the device. Yes, it has 2GB of internal storage (good luck, trying to fill it with text); no, it no longer supports audio; yes, now it only has a single button, the on and off button; yes, it changed color (black, instead of gray). The touchscreen, previously with infrared technology, now capacitive, and the resolution received a very welcome increase, which brought three additional sources for its books (Baskerville, Palatino and Futura, in addition to the old friends Caecilia, Condensed and Helvetica). Recharging and file transfers are done via a Micro-USB type B port, with a USB 2.0 cable included with the charger, however, sold separately (but not in Brazil, meh).

All Kindle software, in a nutshell, is useful: you will not die of love for it or drool over some design feat. On the bright side, it disappears and you are left with what matters most, the books. The most relevant part of the software, by the way, supports file types: natively, the Kindle Paperwhite l MOBI, TXT, PDF, KF8 and AZW; through Amazon's free conversion service (which is not perfect, but hits 90% of cases), it is possible to send HTML, DOC, DOCX, JPEG, GIF, PNG and BMP. No ePub in this list, but at least you can convert files of this type using Caliber.

Click to enlarge and see how Paperwhite fares in relation to paper.

There are some things that the reviews do not address and I wanted to put here. For example, it is impossible to turn off the Paperwhite light! You didn't expect that, did you? Well: no matter how much you reduce the intensity control to zero, the lighting is always on. Weird? Certainly! The most curious thing is that, between light 10 and 0, the difference in autonomy in a measurement made by a user of the Amazon forums was only two hours.

Incidentally, one thing needs to be said about Paperwhite's lighting technology: it is magical. A Kindle without lighting, even in a room during the day, needs to be positioned intelligently to take full advantage of the ambient light. E-ink in black-and-white, gray-and-gray, and any shade makes the contrast go into space. Paperwhite eliminates this problem: if you are in the right position, with light at intensity 10, you will not even remember that it exists but it will not make a difference. If you change your position and stay in a way that would leave the screen in the shade, bad to read, you will notice that the contrast remains the same, because at that time the lighting makes all the difference, especially in the contrast.

No light, no light in your bright blue eyes! I never knew daylight could be so violent

Use the light at full power, 24, overkill I highly doubt anyone will do this during regular use. Intensity 10 (maybe 15) for the day and 5 for the night is more than enough to enjoy a pleasant, comfortable and profitable reading, in my experience.

The covers are very detailed in Paperwhite.

The resolution gain is remarkable. The font used in regular Kindles a slab serif called Caecilia (with a Condensed variation). On the Touch, she was good up to size 3, but the smaller dimensions were already a little blurry. At Paperwhite, Caecilia is a little too heavy. Many people criticized the adoption of Baskerville in Paperwhite, but I confess that I loved it with reservations. weird, but it looks great in even sizes (like 2 or 4), while odd ones it looks weird. Palatino, in turn, looks better in odd sizes. Go figure.

Peculiarities aside, my impression was as follows: the rendering of the fonts is not perfect, but very, very satisfactory, and the finer lines are very delicate. You won?t see the quality of a Retina display, with super-black and super-white whites, but the Kindle Paperwhite would certainly compete with the print of a good newspaper or paperback. In general, the presence of fine serifs makes the pages lighter, especially when nesting with a story, with the screen very close to my face, my favorite reading position.

One reason to make the text very small is to make page changes less frequent. This is important for two reasons: the Kindle consumes real energy when you turn a page and the flash is still a bit unpleasant, especially if you are reading in the dark. Ah, but now you have the option of only having a flash every six pages, you can tell. To this I answer: loud there! It could be that way in the USA, or in an air-conditioned room. If you are in a slightly warmer environment, the flash will be constant, whether you like it or not.

If you've never had a Kindle, great. If this is your second device, my psames. Unlike a company like Apple, which profits from selling gadgets, Amazon profits from selling books in other words, it wants you to buy only one Kindle throughout your life and fill it with books. The practical result of this is that changing your Kindle is a bore.

Let me say it again: exchange a bag for Kindle.

I got a new Kindle! Now I have to download everything again.

Kudos for Amazon for offering a free and efficient storage service, but its policy for those on their second Kindle could not be worse. Yes, all your books and personal documents are in the cloud, and when you download them to the new device, they come with the notes and even at the point where you stopped at least it was like that for me, but your mileage can vary. This works well too.

The annoying thing is that you have to download everything one by one on the new device. I had hundreds of items on my Touch, more than 700, all indexed and kept to withdraw whenever I wanted to catch any information. D to transfer everything via USB, from one device to another? According to Amazon, at the, and from what I saw by, doing this somewhat at your own risk, which may corrupt files and require a reset on the device.

Should it be simpler? Yes: I was supposed to be able to press a button and everything I had on an old device was brought to the new one. It has room to improve.

It is also worth mentioning the issue of indexing. If you're on your second Kindle, you'll want to bring your books to the new shelf, right? Be prepared to wait a few hours until they are indexed by the local search engine. Depending on the size of the files, it can take more than one night and this consumes a terrible battery. I would bet that, in an ereader, it must be the thing that uses the most energy, maybe even more than 3G connection.

That is, if your first charge lasts only a week, do not despair: after everything is saved in the device and properly indexed, it will probably only need power after a month or two, depending on how much you read every day. Amazon promises eight weeks with half an hour of reading per day and Wi-Fi turned off, even with the light on at power 10 (remember: maximum 24).

My personal experience in this first week of use was beeem different from this scenario: I downloaded some 150 files, all of which were indexed (among them some mountains, as The Count of Monte Cristo and the Bible), I read as always, without measure (several articles via Readability, two small books and 40% of Anna Karenina which I recommend), I always left the light on at least 5, I used Wi-Fi only occasionally, and in seven days I reached the final 1020% of the charge. I will need time to do more tests (something like reading the trilogy of Hunger Games on a charge s), but for now I'm satisfied.

Put a case on it

A very cool novelty in the Kindle Paperwhite is the official case from Amazon, made of leather and rubberized plastic, which has a magnetic closure which automatically turns the device on and off. With it, the only button left on the device is obsolete.

The optimal construction, the well-crafted finish and the leather texture are very pleasant, giving air premium the product what the minimum, since it costs R $ 170!

A major disadvantage (besides the price) is the weight: almost as heavy as the Kindle itself, it makes handling a little less pleasant. It is even worse that it is so difficult to put on and remove the device that you will probably never want to take it off once you are finally able to deliver.

That you will need a case, I have no doubt the Kindle Paperwhite screen at the of Gorilla Glass and, if it stays in your backpack, risky ends up bad. If you are going to use this case, it is already a matter of how much you consider the chic finish and magnetic closure to be worth. I confess that a tear fell when I saw the price, but at least my Paperwhite will not end up with a bruised corner like the Touch (the Belkin case I used was great, but had no protection in the corners) and the alloy button / turn it off, which I never liked, is now an emergency resource.

The Kindle Paperwhite is a great product, but I must confess that it didn't make me die of love like the Touch had. If you have never had a Kindle (or have one of the devices prior to the Touch), the fantastic Paperwhite has nothing to think about. This The Kindle to have and love.

If you own a Touch and are happy, do not bother, because even with the higher resolution and lighting, Paperwhite will not change your life, it will give you work during the migration and you will lose resources, besides having to deal with an interface that, in some details, is inferior. S think about doing this sidegrade if you want a lot (but a LOT) to read in the dark.

↪ Consumers are already starting to receive the new 27-inch iMacs