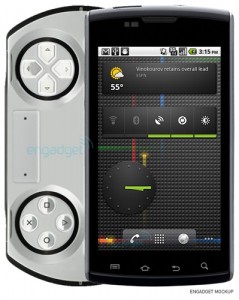 As reported today the Engadget, Sony Ericsson would be planning to launch, later this year, a smartphone with the Google Operating System that would run PSP games.

The new device, which would be a mix of Samsung Captivate and PSP Go, would have a screen between 3.7 and 4.1 inches, WVGA resolution, 5MP camera and a 1GHz Snapdragon processor. All in black, it has some silver and the part of the gamepad in white and silver.

The gamepad, in fact, would replace the smartphone's QWERT keyboard, giving way to a large touch pad area for the analogue controls, along with the standard PSP buttons.

In addition, it would run Android Gingerbread, codenamed for version 3.0 of the OS, and would have a specific area on the Android Market for games. The games would be available, initially, only for the new equipment, but as long as the other smartphones fulfill the necessary control requirements, they could also play them.

The games would be graphically similar to those of PSX or PSP, that is, real 3D games aimed at Android. Games like God of War, Call of Duty: Modern Warfare and LittleBigPlanet may be available as soon as the device is released.

The image that illustrates this post was made by Engadget on top of Xperia.