AltaVista, a pioneering Internet search engine, celebrates its 24th anniversary this Sunday (15). The tool was very successful in the mid-90s, when Google belonged to a not-so-distant future. With the arrival of the current search giant, AltaVista lost space until it was completely extinct in 2013.

READ: Most used emojis in Brazil: see their real meaning

Before the decline, however, the search engine ushered in a number of advances in the search engine industry and allowed users to access many content with unprecedented speed until then. Next, understand AltaVista's trajectory from birth to fall and discover five curiosities about the "dinosaur seeker". 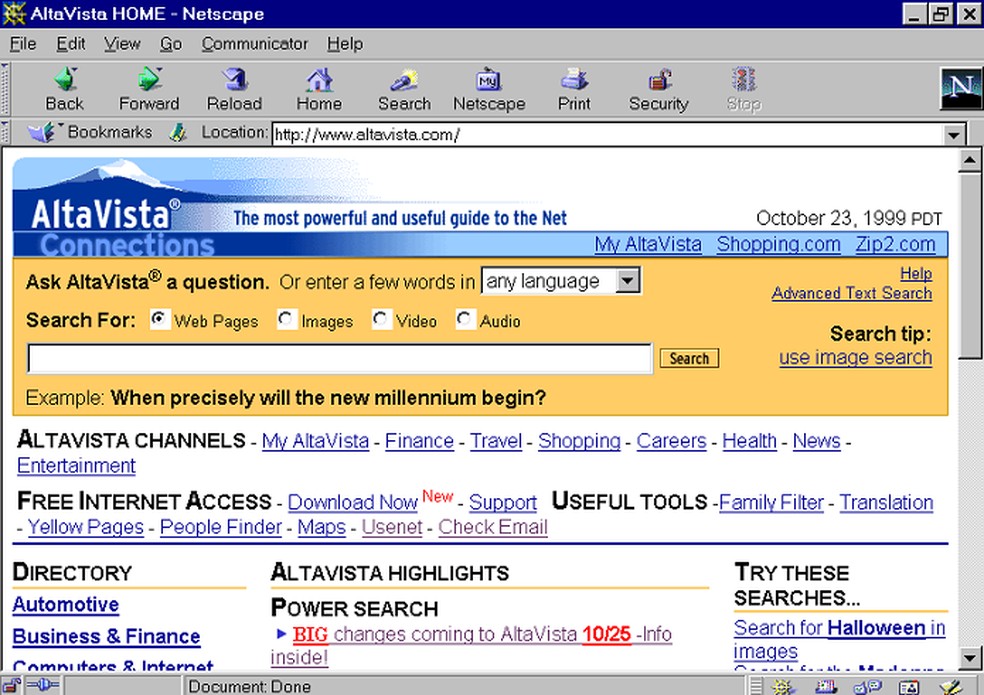 Get to know curiosities about Alta Vista, a search engine that was successful in the 90s Photo: Reproduo / Wikipedia

"AltaVista" means "seen from above". The inspiration for the name came from panoramic views of Palo Alto, California, where Digital Equipment Corporation (DEC), the company that created the search engine, was headquartered.

2. Created to demonstrate the performance of a supercomputer

While Google was born out of a doctoral dissertation on the technical and mathematical properties of the Internet, AltaVista came from a test with the aim of proving the performance of a supercomputer. In 1995, scientists at the Digital Equipment Corporation's research lab created the AlphaServer 8400 TurboLaser. With its 64-bit processor, it could search databases much faster than competitors.

To demonstrate the machine's potential, DEC researchers have devised a text search engine capable of scanning the entire web. Still in 1995, the embryonic version of the search engine carried out its first large-scale search, which returned about 10 million pages.

With the result, DEC realized that AltaVista would be the perfect business card for the company's businesses. To do this, however, he would need to leave the labs and be offered as a public service on the Internet. Thus, on December 15, 1995, after two months of internal testing and less than six months after the start of the project, AltaVista was opened to the public with an index of 16 million documents.

AltaVista's launch was a success: on December 15, 1995, more than 300 thousand users searched the tool. The search engine was able to index about ten times the number of pages that competing search engines could support. Not surprisingly, AltaVista's debut reverberated in the media. The newspaper The New York Times stated that the search engine allowed "highly targeted searches" to be carried out and stressed the speed of the tool.

With AltaVista, users were able to access many content and with a speed never seen before. It is easy to understand why it did not take long for the search engine to conquer the entire Internet, from ordinary people to information professionals. At the end of 1996, AltaVista accounted for 19 million searches per day.

Anyone who thinks that AltaVista's success was only due to the speed and quality of the results is wrong. The search engine was a pioneer in the search engine industry and introduced many advanced features. He was the first to allow users to do research using natural language. In other words, searching for "What an app", for example, would return search results about apps, not about the words "what", "" and "one".

In addition, AltaVista stood out for being the first to combine the search for images, videos and audio together with textual content. The tool was also the first to be able to translate entire websites into (and from) English, Spanish, French, German, Portuguese, Italian and Russian. This was done with translator Babel Fish, who would later become part of Yahoo.

AltaVista started to go into decline with the launch of Google in 1998, and due to changes in the commercial management of DEC. The company was acquired in the same year by Compaq, which transformed, in 1999, the simple and objective page of the search engine into a disorganized portal. This departure from AltaVista's simplified search experience has prompted users, little by little, to turn to Google.

The old DEC has gone through many hands. In 2002, Compaq was purchased by HP, which sold AltaVista to search engine Overture the following year. Before the sale, however, HP redesigned the search engine, in an attempt to equip it with competitors and return to market leadership. "The company tried to become a portal too late in the game and lost focus," said Jim Barnett, then CEO of AltaVista in a magazine interview. Wired.

The effort was in vain. In July 2003, Overture was purchased by Yahoo! for US $ 1.7 billion (about R $ 6.9 billion, in direct conversion). By this time, however, AltaVista had already been swallowed up by the giant Google.

Since purchasing the old DEC, Yahoo! he had been keeping the search engine in parallel with his own research service. In 2011, all search technology created under the AltaVista brand was absorbed by Yahoo searches. Two years later, the company announced the end of the "dinosaur seeker".

What is the best internet sharing service? Leave your opinion in the TechTudo Forum.

Movie of the week: buy “Elvis & Nixon”, with Kevin Spacey and Michael Shannon, for $ 3!

How does Hangouts work? Meet Google's tool for video calls | Audio and Video

10 advantages and disadvantages of working at home