How about enjoying a little sleep? Nothing better at this time than a player that really meets all your needs? And since not everyone has the same needs we decided to make a brief "hit parade" with the 7 best music players for Linux.

Drag the couch and get ready to shake the bones!

OK. I exaggerated the title, for a second I forgot that I am a sedentary (which would not be a big problem for a few minutes), more importantly, I am not what can be called "waltz foot", that fact, but you know what am i good at? I am a great "software analyzer", if that expression exists.

Based on my tests I have compiled a list of 7 great software that meets the varied needs of all people who like to hear a good sound in the penguin.

Remembering that this list is not in an order of best to worse, or vice versa, but nothing prevents that in the end you leave your opinion in the comments, combined?

Starting our super list with one of the most traditional Linux players in the world, Rhythmbox, despite having a complicated name to write very versatile and organized.

It is the default player for Ubuntu and most systems with the Gnome interface, now Gnome is developing a new player, but that doesn't invalidate the great qualities of Rhythmbox.

The program is available in repositories of all distros.

2. Audacious – A simple and lightweight player

Many people have this concern, lightness.

The truth is that on today's computers the amount of memory used by programs no longer makes as much difference as in the past, but the less the better, right?

If you agree with the above statement and have not yet tested the Audacious You're missing a golden chance!

Audacious takes up less than 50 MB of RAM, it's a simple player, but allows you to easily manage playlists, a player that tracks some distros that focus on more modest machines.

All this while having a strikingly beautiful look, there is also the option of using an interface called "classic" that closely resembles the popular Winamp.

Audacious is also in the repository of all distros, in Ubuntu just look for it in the Program Center.

I particularly regard Banshee as "a Rhythmbox with plugins already installed", such as CoverArt's option, which makes browsing albums and bands much more fun.

It also already has plugins originally so we can connect with online services like Last.fm.

Lightness is not exactly his forte, but it is far from being a heavy player, the arrangement of the tracks he provides very similar to the standard Ubuntu Player.

Banshee is also a great option for you to test, it is also found in all major Linux distributions repositories, on Ubuntu you can find it through the well-known Ubuntu Program Center.

For many people listening to music is much more than a complementary activity, if you are a user who likes to accompany your favorite artist on a chance at Tomahawk.

In addition to all the good features of a good player, such as playlists and various music control options, it offers some advantages.

The thing that I find most interesting is that he can give you practically all the "record" of the artist you are listening to, such as the history of the album, the band, the lyrics of the songs, among other things, worth a try.

It is also present in the repositories of all distros, including Ubuntu, but for him we have prepared a more detailed tutorial, so if you want to see some more Screenshots of it and also see how to install on Ubuntu and its derivatives. s click here. And let's go to the next one. =)

This one was a real guess, I remember I first saw it on some XFCE system I tested, I don't remember what the system was, but I never forgot the name of the Player.

I think the XNoise One of the most simple and elegant players I have ever tested, its way of working with lists and the interface seems to me a mix. It would be as if Audacious and Rhythmbox had a child.

This great software is not available in the repository of all distros, you can check yours, but if you use Ubuntu or some derivative like Linux Mint, rest assured we have a very simple tutorial to follow to install it on your system, Just click here to access.

Honestly, I learned to use the real computer with Windows XP, and I loved Winamp, I never got to use the advanced options it offered but what I liked by far was the user interface.

For nostalgics QMMP will fall like a glove, if you, like me, from that time where soda cost 2 reais and Kinder Egg was fifty cents, is a good chance to relive the good times.

QMMP proves to be a good option in lightness as well, if your desire to save resources is a full plate and has all the main features of any other good player.

This player, like most of our list, is in the repositories of all systems, including Ubuntu where you can easily find it through the Program Center. 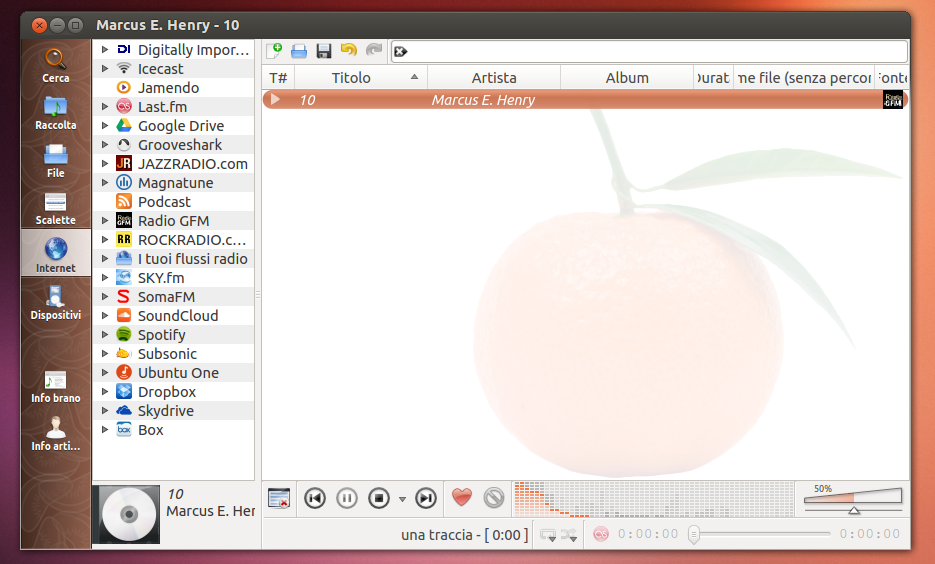 And we finally got icing on the cake.

Clemente, in my opinion, is the best and most complete Jukebox-style music player (these music library organizers) out there, including it's available on other platforms like Windows and Mac OSX as well.

If you are looking for online integration with various services it is a great option, more than that, it can transfer music to your smartphones or tablets, can bring information about the music, such as lyrics.

There are other features that are worth a comment, such as the incredible ease of organizing your music library, in addition to alphabetical order, artists and albums can be organized easily and with a very precise search field it is easy to find any track you want. .

Clementine is in the repository of all major Linux distros, on Ubuntu as you usually find it in the Program Center.

Linux is very well served in the player category, among the audio players for me, these are the best ones, but that doesn't mean for you they are either.

There are several who have been left out so feel free to add your options in the comments so we leave the post even richer information.

How to zip files online | Utilities

WhatsApp gets unlocked by digital and Memoji; see what's new in 2019 | Social networks