At the conference that took place in Prague, Czech Republic, Linus Torvalds spoke about the Linux 5.0 Kernel due to arrive in 2018 and the news that should be included in it.

Contrary to what some might imagine, the Linux 5.0 Kernel should not bring any "super radical" news, it will be a "common" release.

We are currently in version 4.14.x of the Kernel, on the verge of 4.15 kernel that comes with a lot of code from AMD For their new hardware, however, Kernel 5.0, which is due to arrive in the European summer (about mid-year for us here in Brazil), comes out right after Kernel 4.19.

Linus commented that he does not like the idea of ??leaving too high numbers for kernel version control, so whenever 19, 20 or so approaches, the version should be changed, so it's easier to understand what it's all about. , that is, only a number, instead of 4.20, will be 5.0.

Taking advantage of the occasion, Linus Torvalds commented on the maintainers of the Linux kernel and how there is a need for new members to join the select "hall" that contributors. 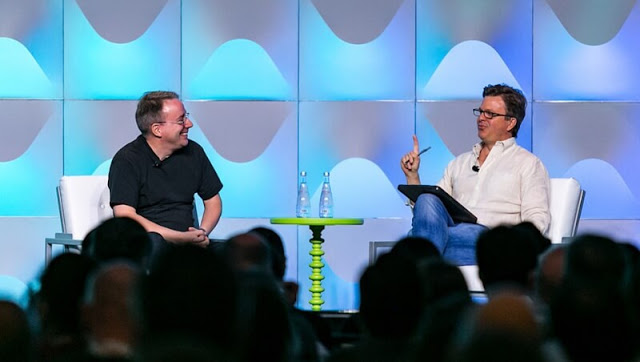 The Linux kernel is already 26 years old and current maintainers are much older than that, according to Torvalds, this creates a problem (not necessarily urgent, but nonetheless a problem), because although there are new contributors always coming, The people really responsible for the code review and committed to the project are already over 40 or 50 years old. Torvalds admits that part of this problem is the complexity of Linux maintenance and the responsibility to handle a project that affects much of the technology world.

Torvalds adds, to explain further, that it is only natural for maintainers to be a little older, because understanding the patches and the insane amount of information input takes a little time, "it comes with the experience"He says. Allied to that, to be considered" trusted "as a Linux developer, it also takes time, so once again, it's natural for the team to be a little bit older.

This is precisely where the problem comes when it comes to making some replacement. It is not easy to find people to fill the gap of an active Linux Kernel developer who has often been in this position for decades. According to Linus Torvalds, tricky to get right into the flow of development as it is today, "how to handle the tasks of any other regular software project", he says. Currently the Linux Open Source project has the largest number of contributors in history, among simple users, giant companies such as Google, Samsung, AMD, Intel, Microsoft, Linaro, IBM and many others.

Despite showing that there are difficulties, Linus emphasized that this should not be an impediment to anyone who really wants to work with the Linux kernel, "You don't necessarily have to be 'old' for this", according to Torvalds, "sand you are confident, able to handle multiple commits and you are not sensitive when debating issues (for email questions), you are invited to be a Kernel maintainer. "

Although (for now) there is no big news coming, there is still a lot to happen in more than 6 months of Linux kernel development. Particularly I'm not looking forward to it, it seems to me a natural evolution, in fact, allied to that, they didn't give me much reason to want it either. So I expect a good job with performance improvements and bug fixes, the usual one.

What about going to become a kernel maintainer?

After problems in beta 7, iOS 12 beta 8 is now available! [atualizado]

Get ready: a flood of external chargers and batteries will be created for the new MacBook

Application that blurs the background of the photo: learn how to use Fabby | Publishers

How to cancel your DAZN subscription | Players