Every week Apple picks one Movie of the week iTunes Store, whose purchase (even at 4K / HDR, depending on production) comes R $ 9.90.

The title selected this time was "Maria Madalena", with Rooney Mara and Joaquin Phoenix.

Directed by Garth Davis (?Lion, A Journey Home?) and the series ?Top of the Lake?) and set in the Holy Land in the first century AD, a young woman (Rooney Mara) leaves her traditional family and small fishing village to join a radical new social movement. At the head is a charismatic leader, Jesus of Nazar (Joaquin Phoenix), who promises that the world is changing. Maria longs for a new way of life and an authenticity that is denied her by the rigid hierarchy of the time. As the group's notoriety spreads and more people follow Jesus 'inspiring message, Mary's spiritual journey places her in the heart of history, taking her to Jerusalem, where she will confront the reality of Jesus' destiny and her own place. next to him.

As usual, our reader Renato Alan Promenzio (@tripalavra), who is a movie card enthusiast, also sent us a comment about the movie:

With Christmas coming, Apple chose the Movie of the week. They are passages / stories like that of Mary Magdalene, who from time to time receive new clothes in order to reach new audiences. The simple script, the cast has Joaquin Phoenix who as always a show part and Rooney Mara, rising star. Now, taking it easy, my definitive Christmas movie "Hard to Kill." ? And yours, which one? 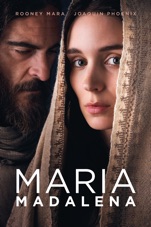