The migration between software is always laborious, especially when this program is one of the pillars of your work, as is the case with many professionals with Adobe Photoshop.

I admit there are cases where Photoshop is irreplaceable for the user, but frankly, it depends more on the user than the program and its features, since there are a lot of professionals working with GIMP for many years, you can choose your apologies, but in "90% of the cases" the reason is simply unsaid workflow and productivity.

The custom with shortcuts, appearance and location of the tools are eventually decisive factors for those who do not want to use GIMP.

O PhotoGIMP A project created especially for those who would like to use the tool but especially used with Adobe Photoshop, or people who need or want to transition between them, without having to decorate very different shortcut keys between the two software.

The PhotoGIMP not a new program, not even a "competitor" of GIMP, let alone Photoshop, he purely "GIMP", but using all the freedom that free software gives us, he was intentionally modified to have a workflow more like Photoshop, many things contained in last year's version remained, but the design was adjusted and simplified.

In PhotoGIMP 2017.1 you will find a new GTK theme that is able to ignore the other themes, so no matter which theme you use, activating the PhotoGIMP theme will keep it the same, this ensures perfect compatibility with other distributions than the other. Ubuntu with the Ambiance theme, as happened in the last verse. This version of PhotoGIMP is compatible with all distros, regardless of interface.

Linux Mint users commented that the last version simply did not fit the theme of the system and ended up being … well … very rough, to say the least, I believe this has been resolved, as shown in the image above.

The Windows version has also been updated together and now supports the same theme, allowing for exactly the same look and feel on Linux and Windows, which facilitates cross-platform migration as well. In fact, now there is no more PhotoGIMP for Linux and another for Windows, as it was before, just one that works on both, ie the design has been simplified.

The tool icons are bigger too, Photoshop's main shortcuts are part of PhotoGIMP, so you don't have to decorate everything again, the darkened theme ensures you don't get tired of editing images all day long and the spatial organization of the tools will also Help you find what you want more easily. For example, common tools arranged on the left toolbar such as Photoshop, layers on the bottom right, etc.

The project also has a number of brushes New pre-installed, ideal for those who like to do digital design too.

Another fix that was made related to adapting different theme resolutions. This bug eventually caused the GIMP maximize button to "disappear", so it should now work perfectly regardless of your screen size and resolution.

To build the PhotoGIMP patch we have put together several open projects around GIMP condensing into a final "product", so we have to give credit to those who really deserve it, who are the GIMP developers (gimp.org) to theme developers, this theme (albeit modified by me), started from the theme that will be released with the future version of GIMP (PhotoGIMP made on top of GIMP 2.8.x), thanks also to the developers of brushes. And last but not least, I thank everyone who helped me test the new version, especially Ricardo Venturini Bugim who helped me test various steps of the project step by step.

How to install PhotoGIMP on your system

Let's get ready: As I mentioned earlier, PhotoGIMP is a patch, so it needs the original GIMP previously installed, so install it on your system the way you want.

Windows: Download the .exe from the site and install normally using the installation utility, basically you can advance it, there is no extra advertisement or "feature" that will be installed improperly. Linux: Depending on the distribution there will be different ways to install, but GIMP is in particular the repository of all, just look for the "gimp" package without quotes in your software manager or application center. 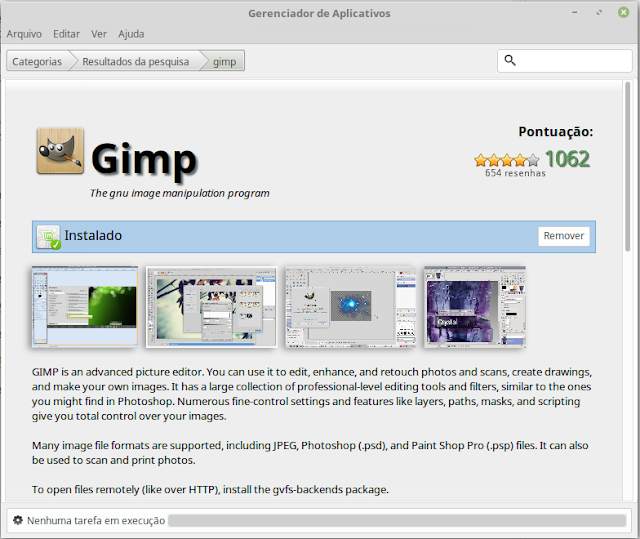 Who prefers to do for the terminal can use these commands:

Once GIMP is installed, you now only need to download the patch and extract it to the indicated location. The files are the same for both Linux and Windows.

With the Patch downloaded, you will see that it has "in hands" a .zip file, inside it there are installation instructions similar to what you find here in a text file, you can consult it.

What you should do is replace the GIMP settings folder with our PhotoGIMP patch, on Linux and Windows it is inside your common users folder.

Extract the folder .gimp-2.8 contained within the ZIP file for your user's folder, it should keep the dot before the name to be hidden. (watch out for the point!)

Example of place to extract:

For Windows the process similar to Linux, just extract the folder .gimp-2.8 contained within the ZIP file for your user's folder inside disk C.

If the modification doesn't appear right away, or at least the theme, with GIMP open, make sure the theme is selected and enabled.

V in the menu edit >> preferences >> theme and in the list of available themes look for "PhotoGIMPDiolinux", select and click the" OK "button and the change should be instantaneous. 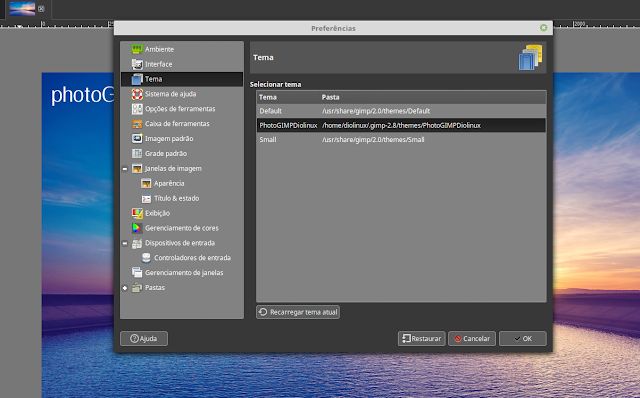 Enjoy PhotoGIMP and have fun! Remember, this project has no cost, made available to you completely free of charge, so share it as a payment, tell friends you might be interested! 🙂

If you encounter problems or have suggestions for future issues, please leave us comments or email us your ideas, perhaps they will help shape a future version of the project.