The service can be used by people with any sexual orientation. In the guide below, TechTudo explains how each of the five games in the app, which is rated 18 years old, works. Check out the tips and animate your relationship between four walls. 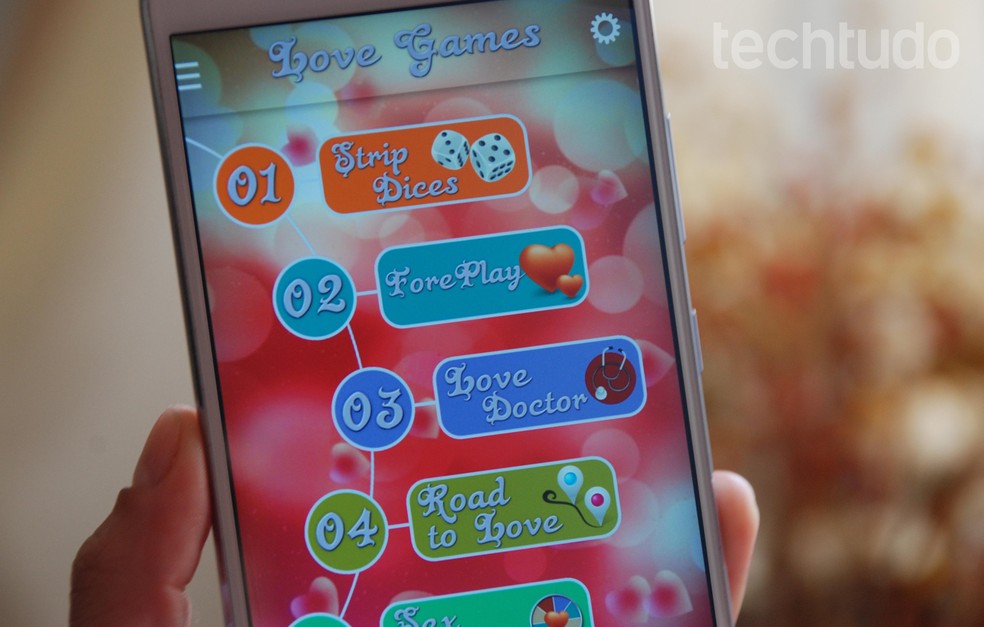 Step 1. After installing Sex Games, open the app and press the "Accept" button in the age window. Then tap Strip Dices to open the strip dice game; 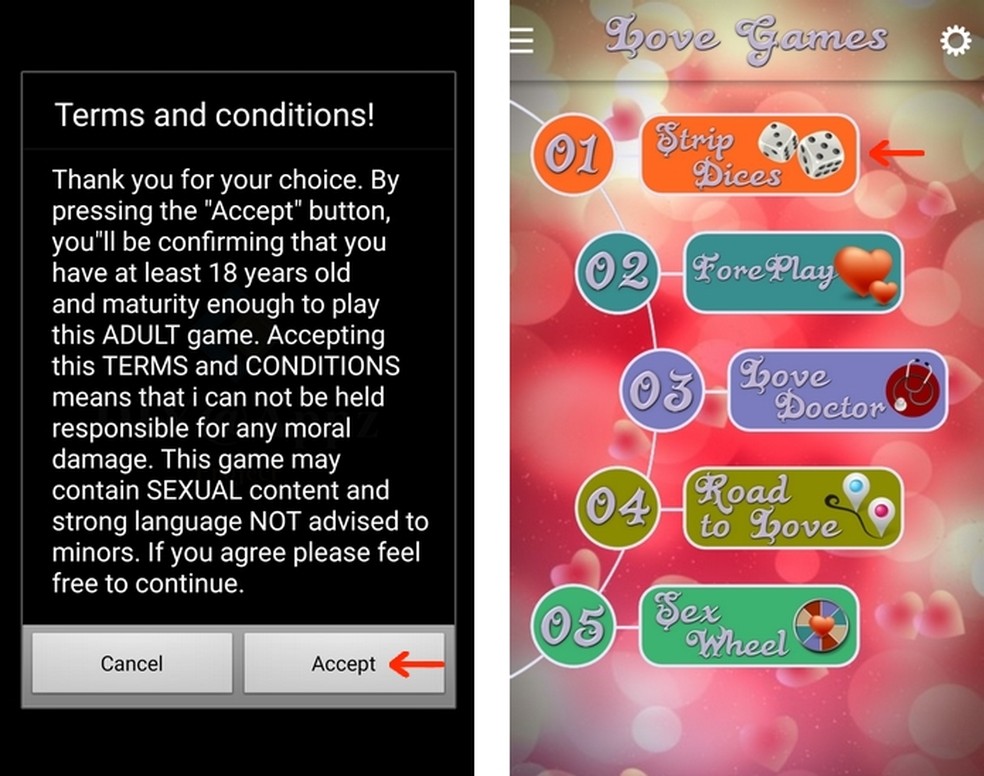 Step 2. The app displays the game rules on the first screen; hit the "Play" button to proceed. Then tap on the "Player 1" and "Player 2" titles, with the number of rings corresponding to the number of pieces of clothing each player is currently wearing. The values, which start with zero, will be updated with each tap; 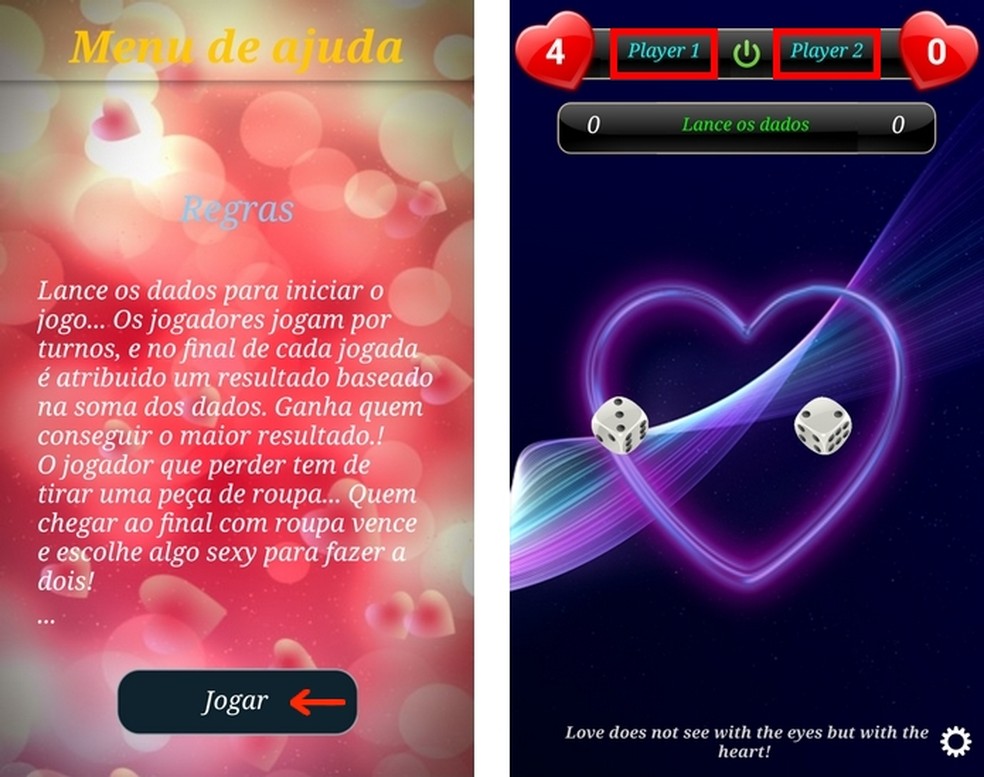 Information on the number of clothes of each player for in-app striptease game Sex Games Photo: Playback / Raquel Freire 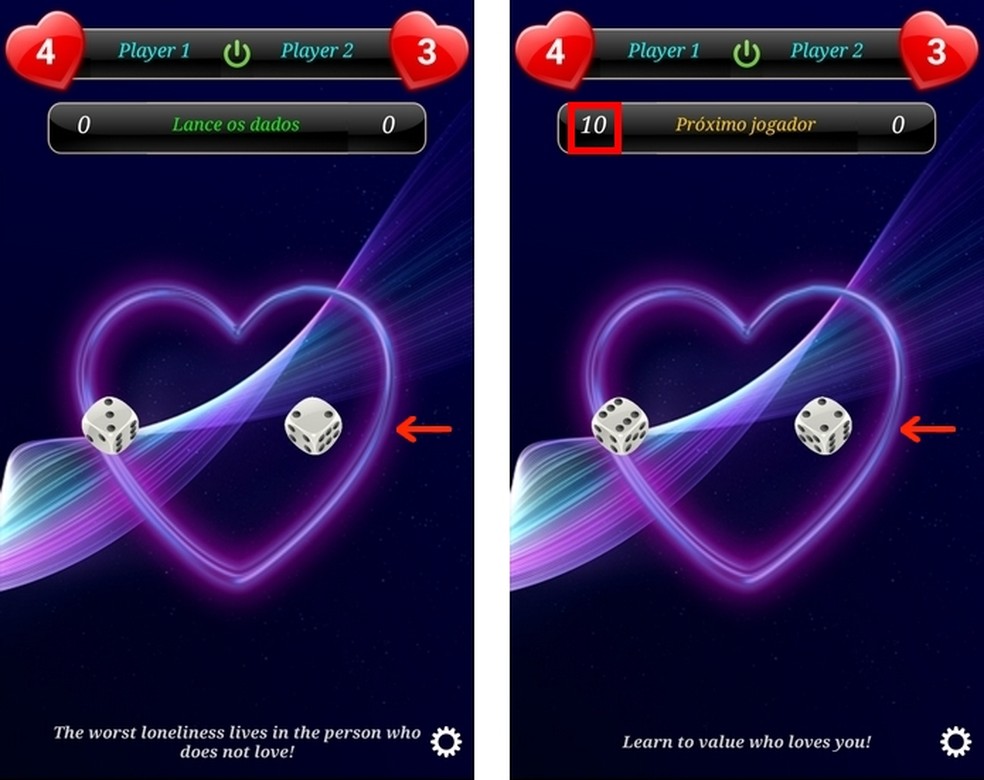 Step 4. Each round, the player with the lowest score on the dice must remove one piece of clothing and pay a "gift" of sex character. The clothing numbers are updated automatically in the hearts. Who reaches zero first loses the game and follows the orders of the app. 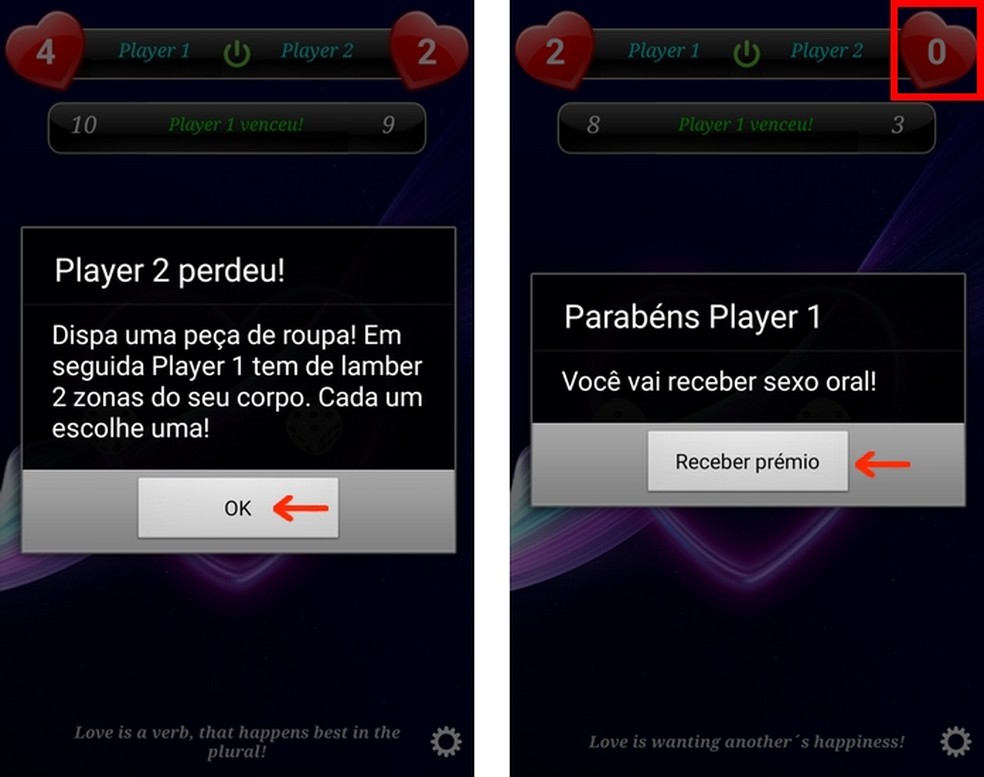 Step 1. To play the foreplay game, go to "ForePlay" in the main menu of the app. Read the rules of the game and tap "Play" to get started "; 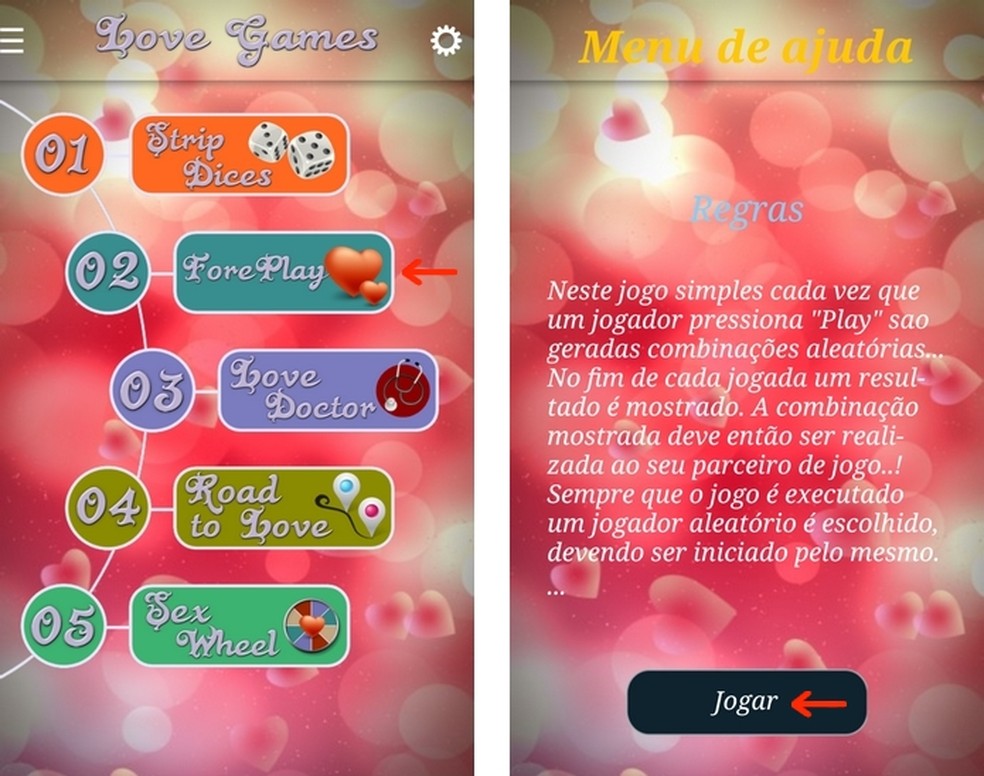 Opposition of the preliminaries game in the main menu of the Android application Sex Games Photo: Playback / Raquel Freire

Step 2. At the top of the screen, verify who the player in the round. This person should press the "Play" button and wait for the task to appear on the screen. Tap "Accept" to accomplish the task given in this example, to palpate the hands of the partner, which should be performed for the time indicated on the timer; 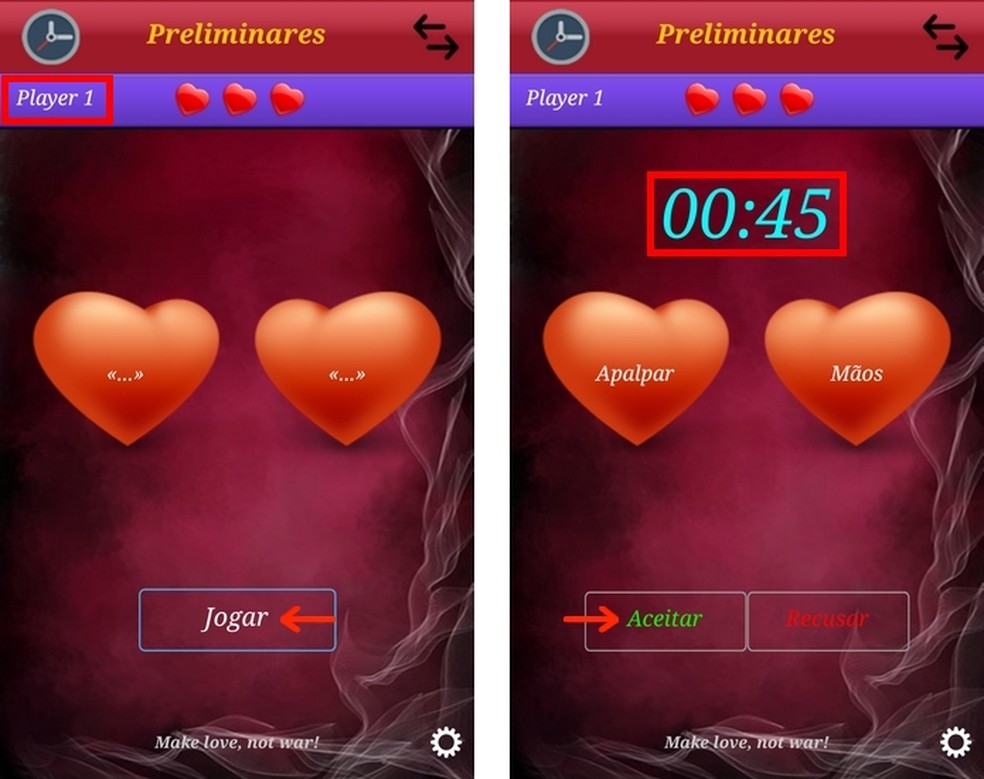 Step 3. At the end of time, the app will switch to the other player, who must press the "Play" button to view an ethical task. Press "Accept" if you like the suggestion or "Decline" if you want another gift. 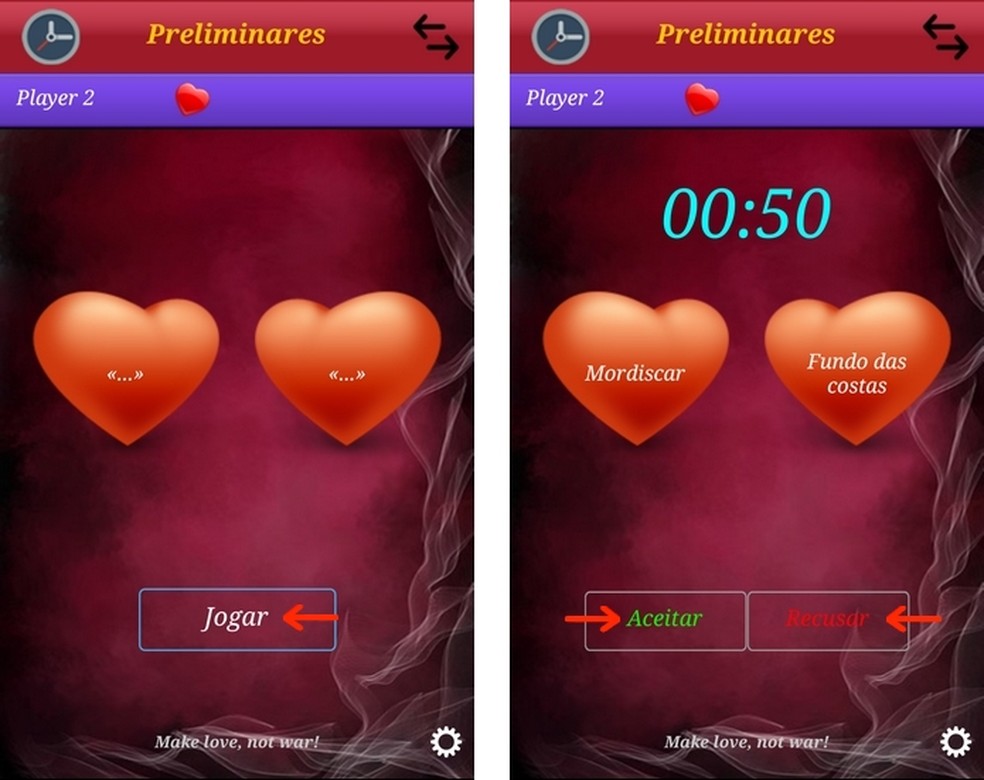 Step 1. Enter the "Love Doctor" menu to play the adult version of "playing doctor". When you open the game, read the rules and then tap "Play"; 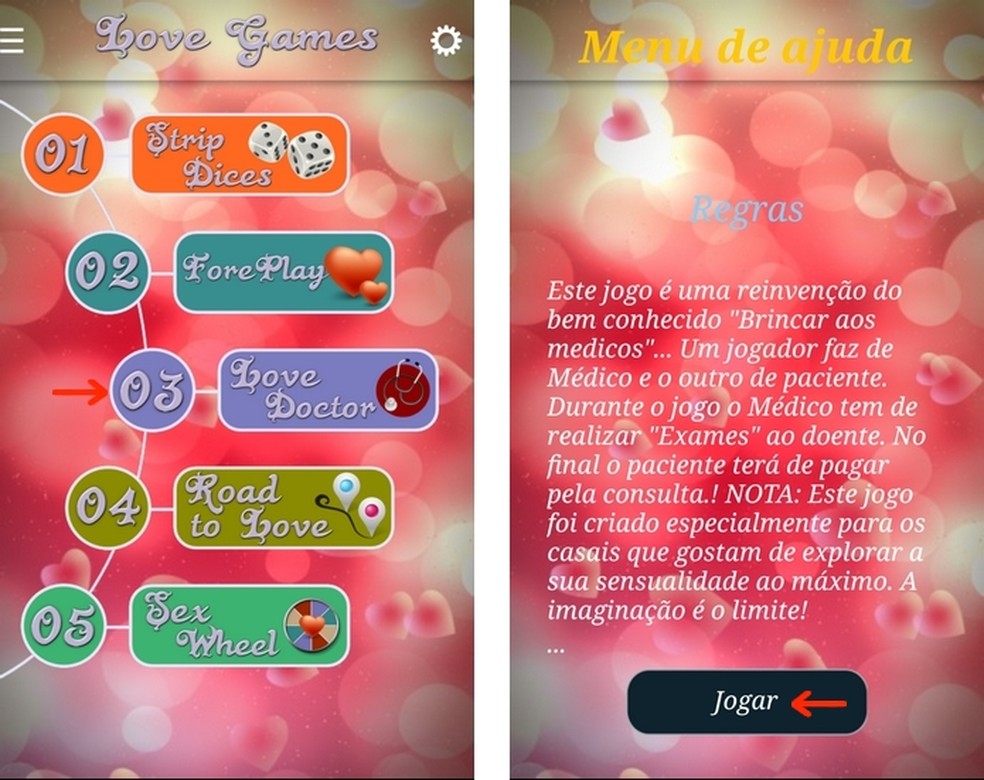 Love Doctor, one of the games in the Sex Games app, features an adult version of the doctor's prank. Photo: Playback / Raquel Freire

Step 2. Tap the heart at the top to increase the number of "exams" to perform. With the value set, press the green "Start exams!" Button; 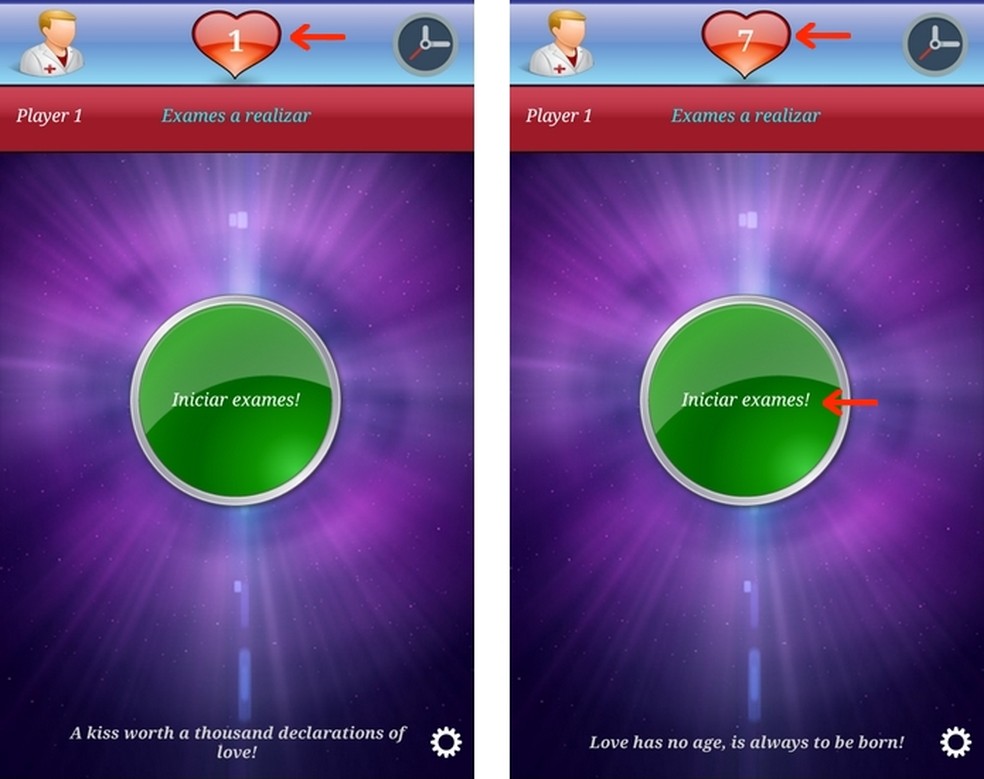 Step 3. In the orange circle, see what task the "doctor" should perform. Tap the check to accept or the "X" to change exam. Perform the action until the timer is reset; 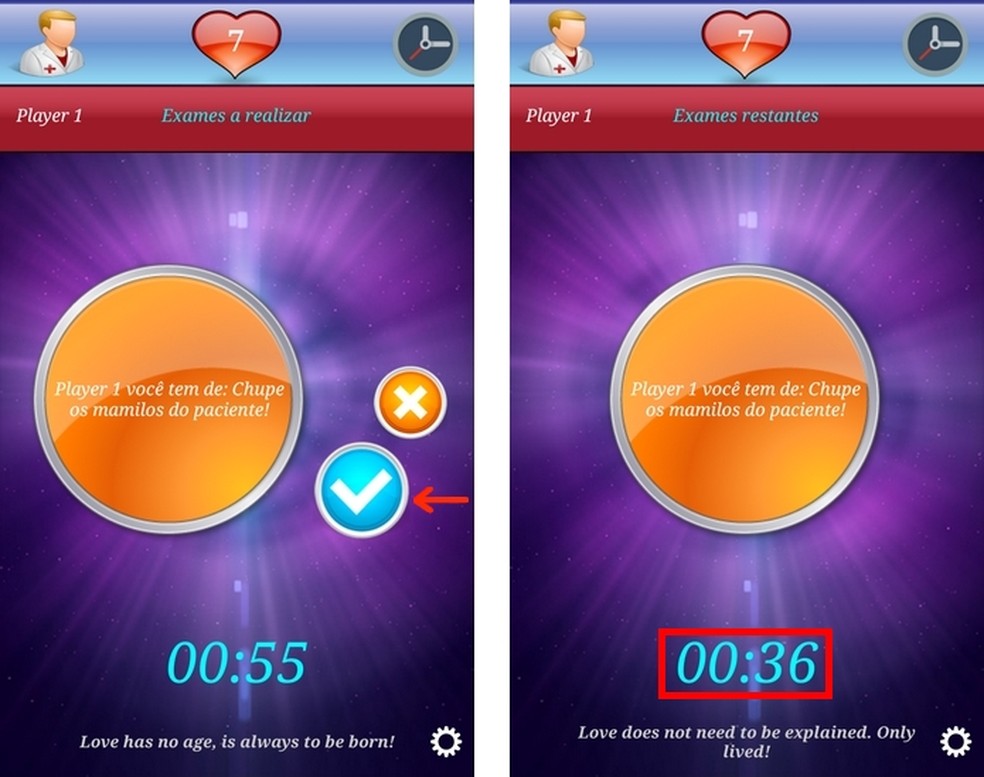 Step 4. Upon completion of the "exam", the counter displayed in the heart will be updated with the number of tasks remaining. Press the "Next Exam!" to see a new suggestion by accepting or declining it as directed; 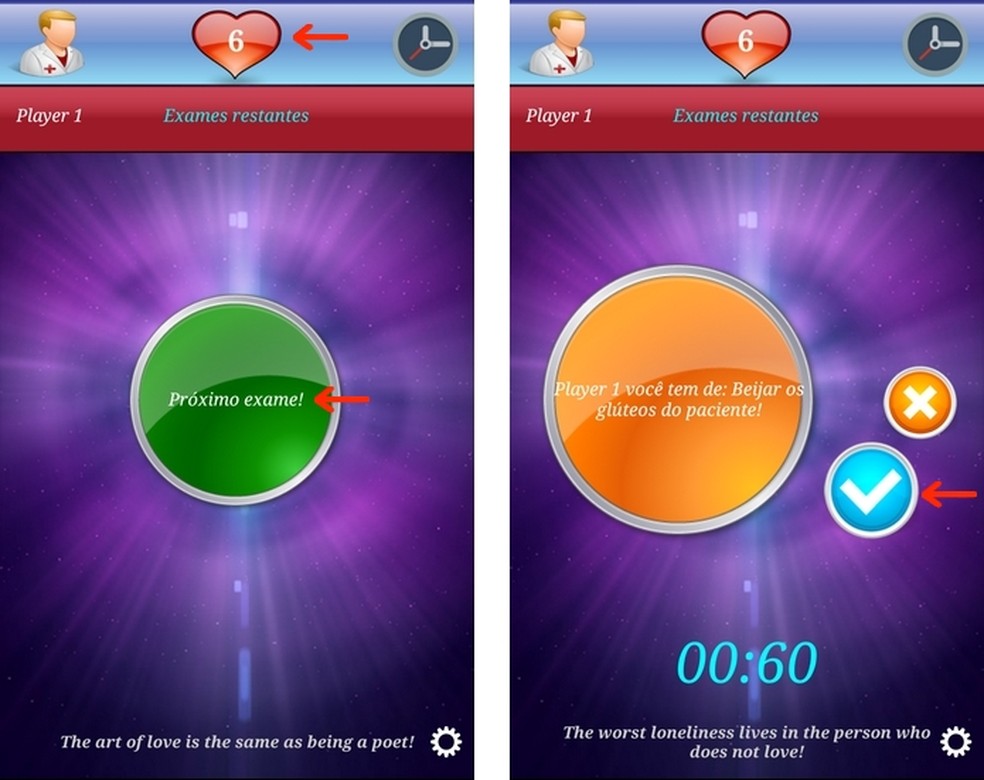 Examination queue to be performed by one of the couple's partner or partner Photo: Reproduo / Raquel Freire

Step 5. When the exam counter reaches zero, the Sex Game app will ask the "doctor" if he wants to receive payment for the services performed. Tap the check button to accept and see what sexual reward the app suggests. 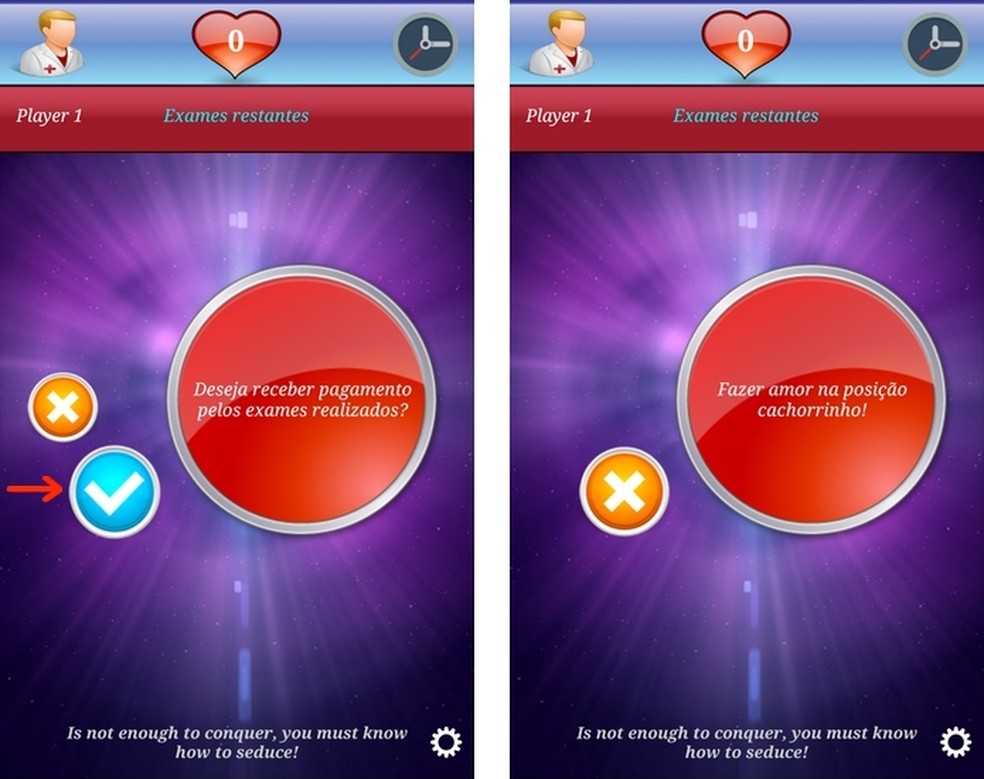 Step 1. At the Sex Games – Edio Couples main screen, enter "Road to Love". It is a board game with sexual gifts on the way. To start, press "Play"; 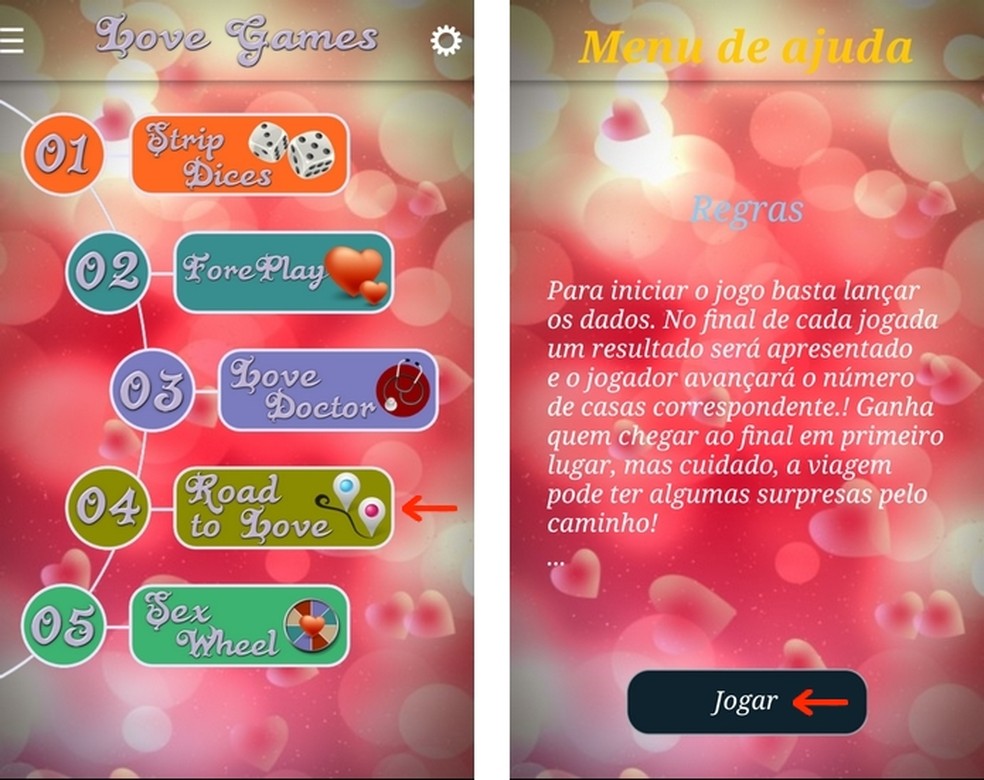 Step 2. Tap the "Start" button in the bottom left corner of the screen. In the place a data will be displayed. Tap it to view the number of houses to advance; 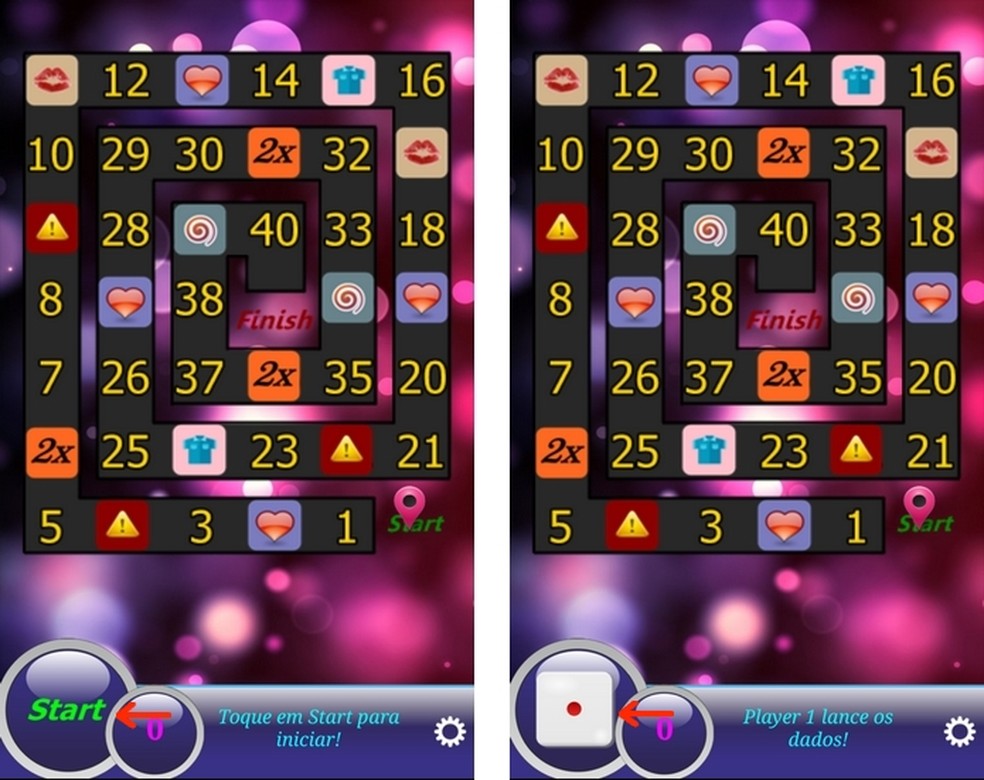 Step 3. The player's indicator moves alone to the correct square. Then the message "Player 2, your turn to play" appears. The second person must then touch the dice and wait to see where it fell. If you stop in a house with a gift, you must do the task and then press the "OK" button to close the dialog box and return to the board; 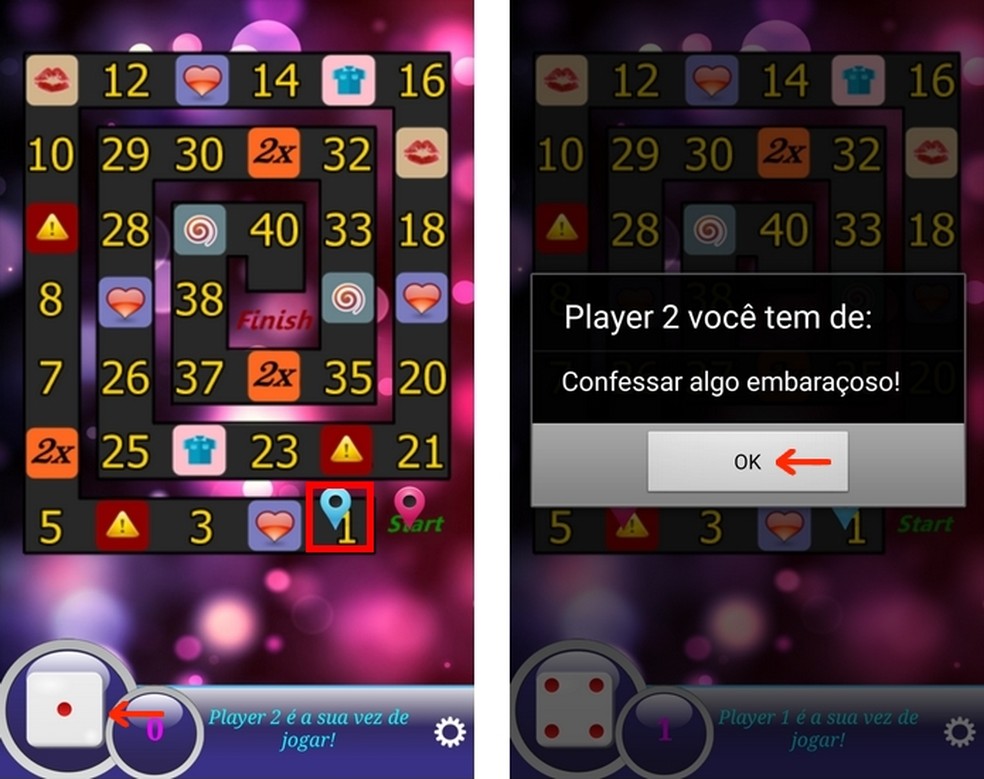 Step 4. Roll the dice with your partner until one of the players reaches the end, indicated by the caption "Finish"Whoever comes first to the mark will be the winner and receive a sexual prize from the loser. 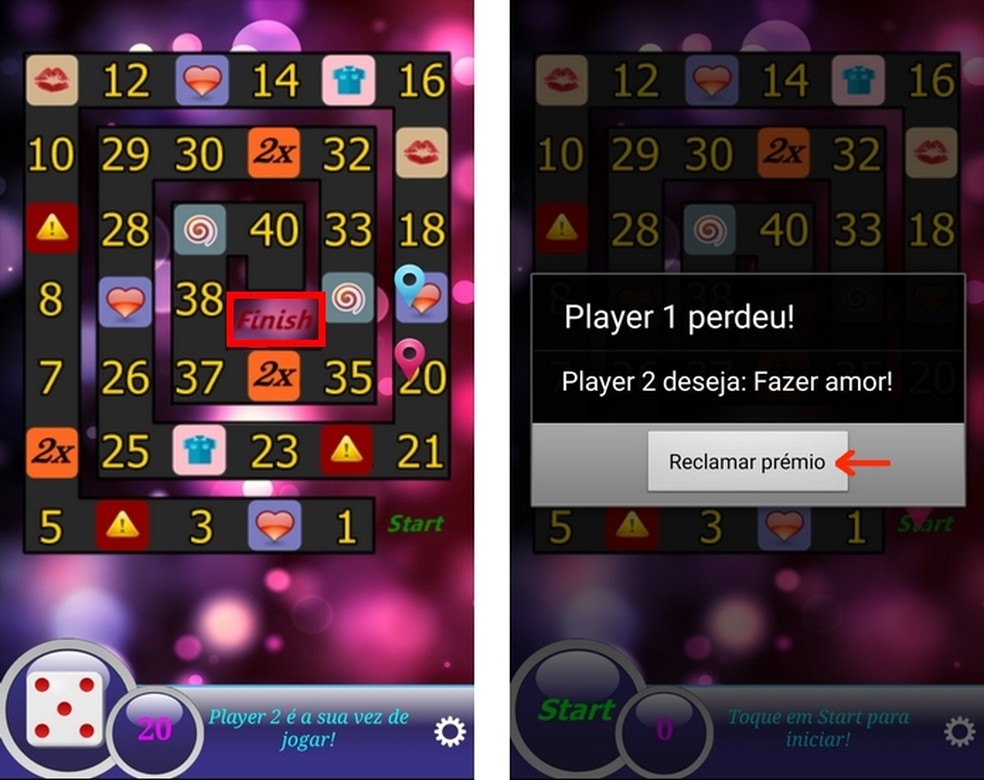 Step 1. Enter "Sex Wheel" in the main menu. Read the instructions on the game of sexual roulette and press "Play" to start the game; 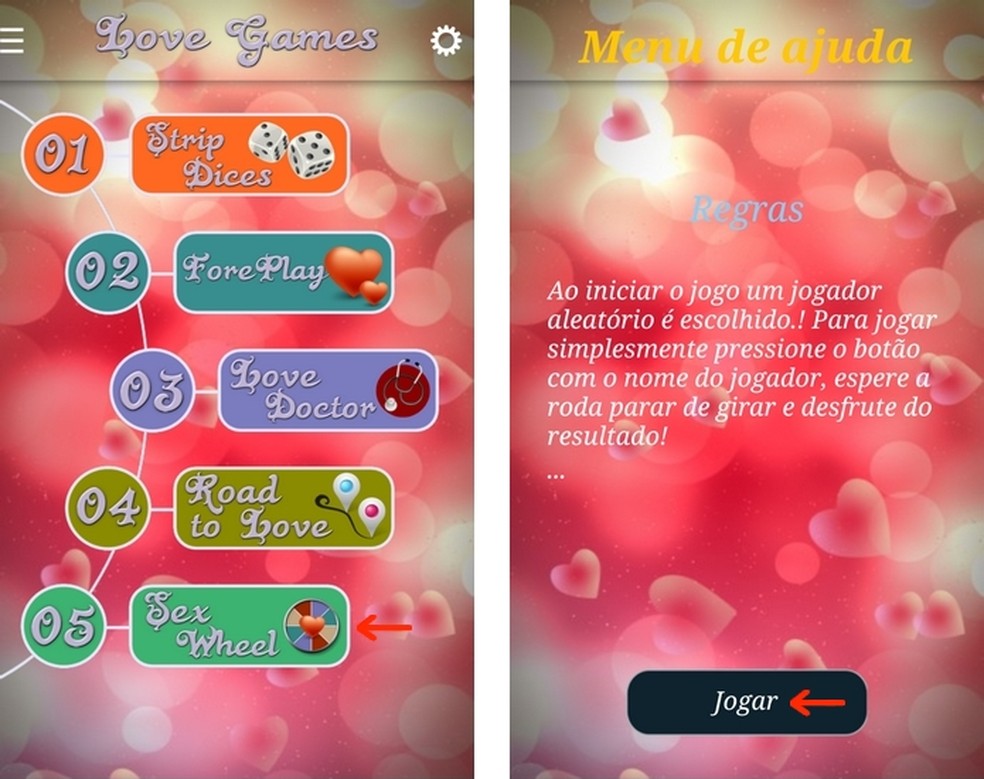 Step 2. In the middle of the roulette wheel, the app indicate the player who should start by spinning the wheel. The player (in this case player 2) must then touch the corresponding button and wait for the roulette to stop spinning. The task also appears in the center of the wheel; 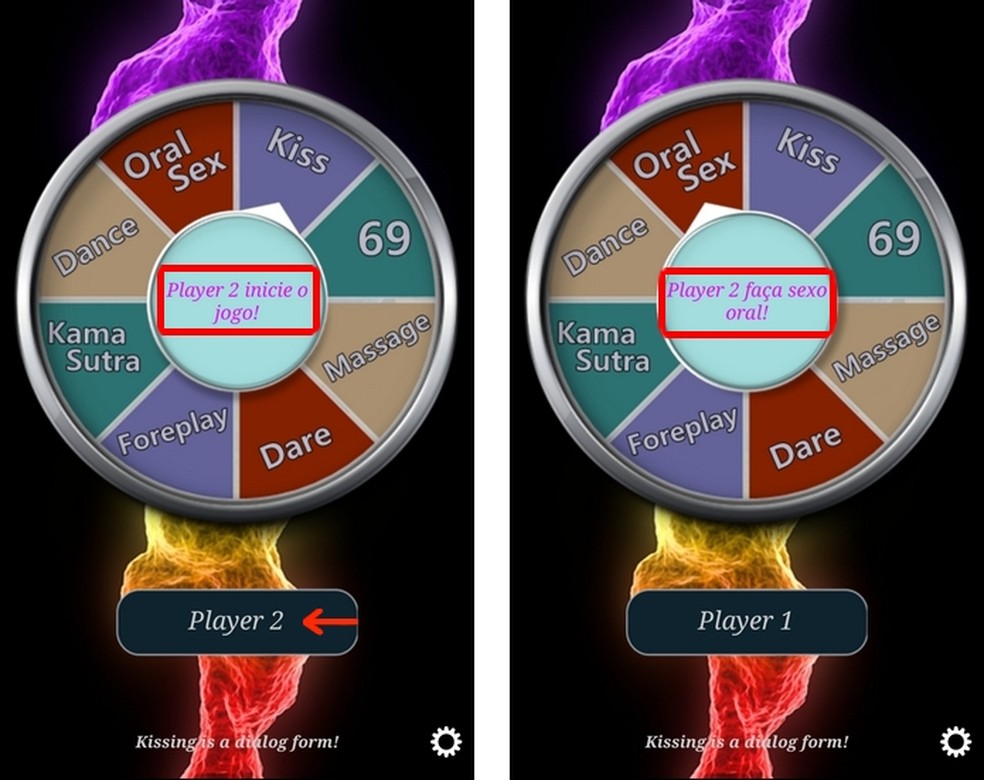 Center of roulette indicating sexual gift which player should pay to another Photo: Reproduction / Raquel Freire

Step 3. The app will then switch between players, asking the other person to press the roulette wheel. Repeat the procedure while both are in the mood to play sexual roulette. 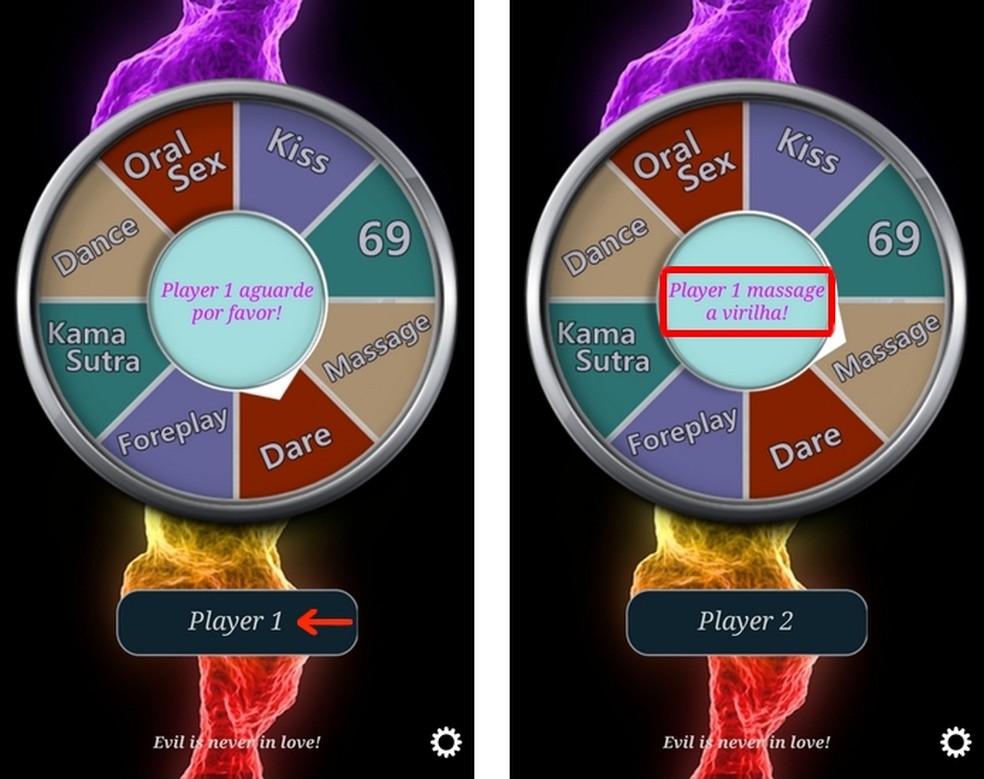