The Ricoh Theta camera has been officially announced, after some rumors, it is confirmed that the device can shoot 4K in 360 degrees. It uses the same sensor as the THETA V model, capable of real-time image processing. Ricoh Theta delivers image stabilization even at 4K resolution, but generates videos of up to 3 minutes at resolution and up to 30fps. To store high quality videos, the device has a 14GB memory card.

With video captured in 360, the newly announced camera promises an interesting feature that allows people to keep people's faces in the center of the picture through automatic detection. It also assists in beautifying photos by correcting overexposure as well as noise, preventing glare in the shooting of people.

Also added is a night mode called Night View, which combines noise reduction with dynamic range correction and automatic face detection, the idea of ??delivering low-noise captures. As a note, the manufacturer informs that this mode must be used with the aid of a tripod. Also in this mode there is automatic exposure and white balance control, resulting in a significant difference in contrast, depending on the brand. 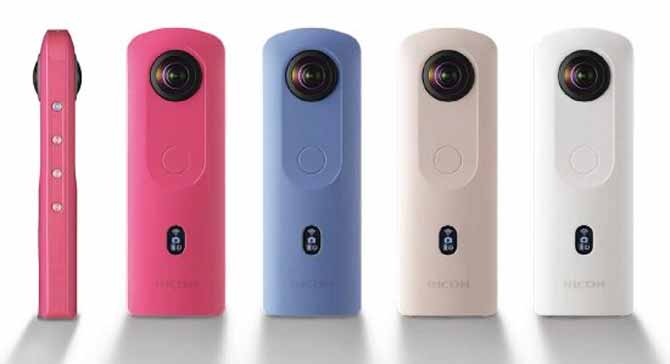 In addition, you can make underwater captures with a subtle white balance correction to compensate for color during capture. In addition, Ricoh Theta has HDR with improvements over previous models, reducing problems with chromatic aberrations and promising a more natural effect during photos and captures in general. The company also promised improvements in camera processing time, which is now 9.5 seconds faster.