Huawei is planning to launch its new MatePad Pro tablet on November 25th and the same day the company is expected to announce its new Huawei Sound X smart speaker. Information about the new smart speaker was obtained thanks to the leakage of its manual on the Chinese social network Weibo.

With a cylindrical design reminiscent of the Apple HomePod, dark gray and black finish, the speaker is 203mm high, 165mm in diameter and weighs about 3.5kg.

Smart speaker is assisted by Google Assistant to perform various actions and controls.

The device comes equipped with a quad-core (1.5GHz) processor, 512MB of RAM, 8GB of storage capacity and six built-in microphones capable of detecting the user's voice up to a distance of up to 5 meters. A physical mute button, volume controls and an extra button for other functions are also present.

The price of Huawei's smart speaker has not yet been released, but expect a value above $ 100. More information about it should be released in the coming days. 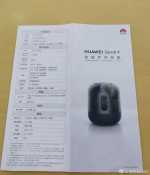 Still on smart speakers, the Google Nest Mini was officially launched in Brazil on the 11th to compete with Amazon Echo Dot. Google's device has a suggested price of $ 349 and Amazon's costs the same.