Xiaomi, through its Fimi brand, is launching the Fimi Palm, a portable device that offers mechanical shooting stabilization and a host of recording features, including 4k recordings. One of the points that draws attention to its design, it has a preview screen, fits in the palm and much like the Osmo Pocket, not to say identical, launched late last year.

Xiaomi's proposal here is simple and follows a market positioning that the company has long practiced, a product capable of offering the same as competition for a lower price. While the Osmo Pocket was released for $ 349, Fimi Palm is coming out for $ 150 at Gearbest, less than half the value.

To know in detail the differences between them would require careful analysis, but both promise high bitrate recordings at 4k, but with a big difference in capture style. While the Pocket offers a lens with a viewing angle of 80, the Fimi Palm's camera has 128, something that changes the aesthetics of captures considerably.

The new handset is also a bit bigger and heavier, but nothing that makes a significant difference, the Pocket is 122 x 37 x 29 mm (116g) and the newly launched 127 x 31 x 23 mm (120g). One difference is in the space used in the gimbal body, while DJI used a space to store the phone's connectivity piece, Xiaomi extended the screen, resulting in 1.22 inches compared to 1.08 inches from DJI, both touch-sensitive. 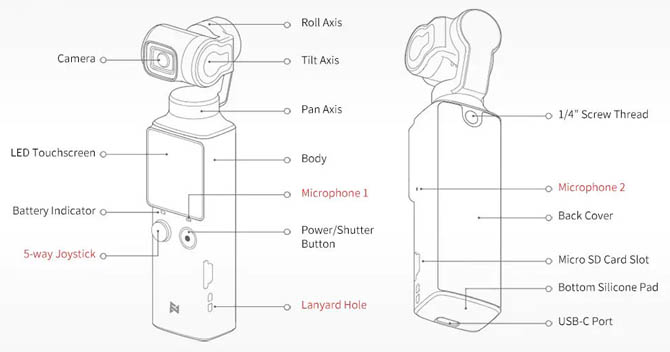 Although both devices have a sensor of the same size and capacity, 12MP 1 / 2.3 "CMOS, and record at 1000Mbps, Fimi can't reach 4k60fps like DJI's, being limited to 30fps. Something that should make life easier for Who already has some capture equipment 3.5mm microphone input present in the "copy" compared to the type-C of the older.

Another Xiaomi battery improvement, 125mAh more, adding up to 1000mAh and promising to deliver 240 minutes more than the competition's 140 minutes. Fimi also has the advantage of offering integrated WiFi and Bluetooth without the need for separately sold adapters. It is noteworthy that although the product made by Xiaomi through its Fimi brand is cheaper and superior in many features, DJI pioneered, practically invented the design and how the gadget's technological components were organized.

Even with more features and cheaper, this does not reflect the ultimate user experience, which can still be far superior with the Osmo Pocket.

This is a harder step to implement, especially because it involves market risk, as product acceptance has already been tested. Moreover, even cheaper and complete in many respects, this does not reflect the ultimate user experience! Just waiting for the first analyzes to know if the investment is worth it.