Every Thursday Apple picks one Movie of the week iTunes Store, whose purchase (even at 4K / HDR, depending on production) comes R $ 9.90.

Here's what Apple says about it:

In the second part of Christopher Nolan's Batman trilogy, Machiavellian Joker (Heath Ledger) says: ?Disturb the established order and everything becomes chaos. I am an agent of chaos. ?The phrase represents the figure of the villain who spares no effort to practice his wickedness in a film that mixes with intense and psychological suspense providing one of the great confrontations of cinema between good and evil: the conflict between the anarchic and terrible Joker and Batman, the crime fighter (Christian Bale). The Joker lives up to his braggadocio with terrifying antics that terrify Gotham, disrupts the plan to dismantle the city mob and endangers Rachel (Maggie Gyllenhaal), the woman Batman and public prosecutor Harvey Dent (Aaron Eckhart) love. Moreover, he was still both plunging into the dark abyss of their own souls in this complex and brilliant tragic drama. Heath Ledger passed away before the film's release, ending his career with a powerful, comic and impressive acting performance that earned the actor the posthumous Oscar for Best Supporting Actor.

To begin this week's critique, I would like to ask the Marvel and DC fans to set aside their preferences. The Dark Knight is Batman's best adaptation, whether for Christopher Nolan's last direction, or for Heath Ledger's great script and acting that earned him an Oscar. For those accompanying Batman, several details have been added; For those who don't know it, it didn't matter because there was adventure, suspense and a surprising script. Yes, I agree that superhero movies tend to be simple, fun and even exaggerated. In this film we have a version that, within its universe, sought to walk next reality, bringing its protagonist close to the public. This movie would go very well on its own, but thankfully it came with a trilogy. 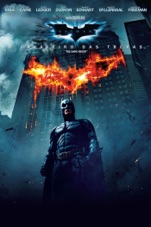