Whether for academic, professional or even personal use, having an email is part of our routine, and with each new service or application we use, we are asked for an email account, and organize all our electronic letters. It's not always an easy task.

If you notice the familiar interface, this is because the app is a fork of Nylas N1, another email manager, maintained by one of its former developers, which ensures that faster Mailspring consumes half of the RAM and CPU because its base in C ++, unlike Nylas N1, which was composed of a JavaScritpt sync engine, also features a completely revamped composer and several new features.

For Fedora and OpenSuse-based distros you can use the RPM option, if it's Debian, Ubuntu and Linux Mint, in DEB, however I strongly recommend the Snap option as it has auto-update as its differential, in other cases you have to download and install again with each new version of the program.

Another interesting aspect is that you can select Snap's software channels, and test the application in different development states, experimenting with possible new features.

For terminal lovers, once you have set up Snap in your distro, use the following command:

As I said earlier, with Snap you can test the other versions of Mailspring, just add one of the following flags: –candidate, –beta, –edge, for example suppose you want to test the beta version of the app, however Be aware that developing versions may contain bugs.

To uninstall via terminal is very easy.

In the Ubuntu store you can find Mailspring by searching by its name and installing easily with just a few clicks. 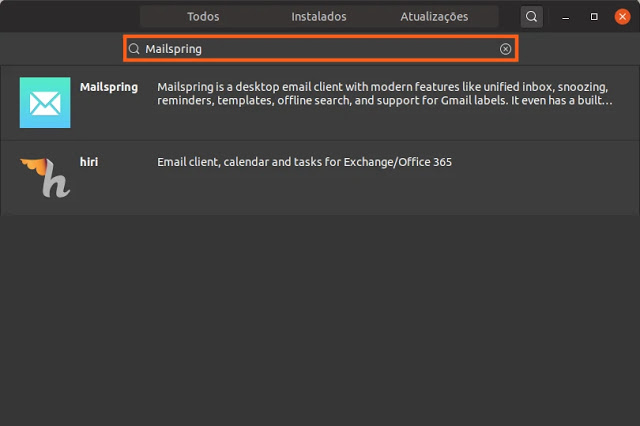 Mailspring is a great email client

Right after installing the program, you will see a login window, for using Mailspring you need to sign up for the service, but calmly you will not have to pay unless you want the benefits of the PRO account.

Create your account normally, login to the client and a window requesting the connection of an email account appears.

For Gmail accounts, the program provides a URL, for integration with Google services, follow the step-by-step proposed by the app, if you have any questions, check out the video demonstrating some of the features of Mailspring and its installation on DEB

It is very simple and easy to configure Mailspring, formerly its interface was all in English, in its current state in addition to the interface fully translated into our language, it has spell checker, custom email signatures, GUI themes, views, integration with the system tray and more.

And do you use any email client? I confess that in times and times I change applications, alternating between Thunderbird, Mailspring and Gmail Web, and have already ventured out with Geary, Evolution and others.

Comment below your favorite way to manage your email, or if you currently use it via browser.

I hope you in the next post, here in the blog Diolinux, SYSTEMATICALLY!