First of all, I am not here to state whether philosophically or morally piracy is something wrong or correct, only that according to the laws in force in our country (Brazil), piracy is a crime. So I will follow this line of reasoning, and expressly leave this not the positioning of the blog Diolinux, being entirely my responsibility. 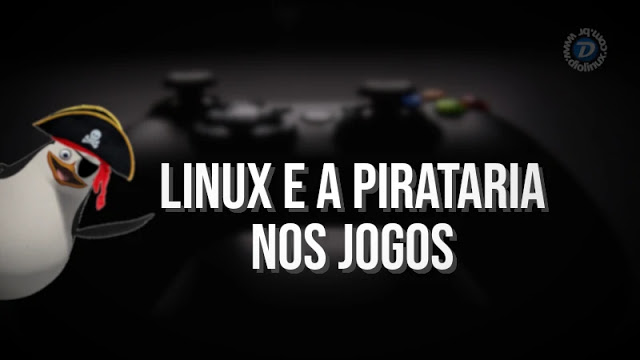 In the last Diolinux Friday Show, which you can listen to in our podcast (Android Apps on Linux Desktop and Linux Gaming Calling Attention), at one point, I said that it is not uncommon to see users pirating games in Brazil, and with Windows users often games are pirated. Don't get me wrong, this statement is not an absolute law that rates users as potential pirates, just what I observe, either with acquaintances or clients.

Linux and its effect encourage projects

And Linux users, do not practice piracy in games? Being straightforward, yes! (I speak in general, as before, I am not saying that every pirate user, text interpretation please). However, the deeper situation is more curious than that.

From what I could tell from Linux gamers users, more and more original games are purchased and avoiding cracking something becomes a rule. It is curious to note that with every Steam promotion, for example, more games are acquired legally, and not always the cable player of all, something that also occurs in the Windows world, however the practice of cracking software is quite common.

Well, piracy exists regardless of the operating system, and even many users have a conscience and avoid piracy, in some cases it is still a necessary means.

Wow! So are you encouraging piracy? Let's not be hypocrites. Who nowadays does not practice piracy at any time? If you are a student, be aware that by taking Xerox from books (teachers encourage and do this by creating handouts for example), this would be piracy. Among many other cases, you know you eventually practice. So let's be more complacent, and realistic.

Anti-cheats are a major cause of game piracy on Linux, as they identify Proton / Wine as a cheat, this method eventually hinders play on Linux distros. See this subject, and fully understand this issue.

Because of this, users end up downloading a cracked version of the game for Windows (which commonly comes without anti-cheat), installing the pirated version via Wine. But the situation would be largely avoided if this problem did not exist, as many players buy the original game and unable to play it legally, adopt the method described above.

Other ways to pirate games exist in Linux, such as distributed pirate games in Flatpak. Something extremely dangerous is the security of the system, so curious to plant, beware!

Talking about game emulation something delicate and quite complicated, there are several nuances and in some cases even the manufacturer of the console or game, stating that crime, keeping a digital copy as a backup, is not. The problem starts when you don't have the game, and even playing an old title can be considered piracy. As I mentioned at the beginning, I do not want to discuss whether I would pirate something wrong or right, from a philosophical or moral point of view, after all I have my convictions and I believe you have yours, I just want to demonstrate that it is in our daily life, regardless of platform or system. operational.

If there is something that I try to practice, value who or things I like, support projects a way to continue them and even better, provide news.

So if there is a game, YouTube channel, program or project, encourage it! Buy the games you like, give value to those in charge of the project and if you don't have a little money left, wait for promotions, Steam always offers tempting offers of games that cost over $ 100 out of the $ 20.00 range. .

This is one of the ways I bought games via Steam the most, either by shopping on sites like Cloud or Steam promotions, as well as follow channels on Telegram that periodically share links to promotions, or even free games.

Be part of our Telegram channels, and receive various types of content, such as possible game promotions.

I know the tricky thing, and that a lot of people also have this question if there was piracy on Linux. And even if you are against or in favor of this practice, I bet that encouraging the projects and games that you like the best choice, regardless of your point of view, after all without very likely contribution that it will end, and who will be harmed you.

Join our forum Diolinux Plus, and continue this discussion, remembering that one of the rules of our forum, the sharing of content or apology to piracy, after all in Tupiniquin lands such a practical crime. Be thoughtful and give your opinion eloquently, your point of view welcome. Do not encourage people to practice piracy, impose their point of view, and do not want this responsibility for themselves, let each one draw his own conclusion.

Ufa! Today's subject was tense, wasn't it? () I hope to see you next post, here on the blog Diolinux, SYSTEMATICALLY!