This one for those who have been with Apple for at least three decades or at least has the company's story on the tip of the tongue: a W.A.L.T. original was discovered in nature and, for the first time, filmed running in all its glory. A must see!

For those who don't understand anything I'm talking about, I explain: Apple W.A.L.T. (Wizzy Active Lifestyle Telephone) was a prototype of Ma that intended to unite a number of elements: it would run a modified version of System 6 (the Mac system at the time) and had fixed telephony and fax connection, with a touch screen controlled by a stylus ie , a forerunner of the Newton, iPhone, iPad, and Apple Pencil, so to speak.

The product was announced at Macworld 1993 in Boston, but was never officially sold because AirPower has company. A few years ago, a unit of W.A.L.T. he painted on eBay for the $ 8,000 trifle, but that copy worked only partially. This model captured on video by Sonny Dickson works perfectly, and for the first time we can witness the mythical product in life.

The W.A.L.T. video, of course, doesn't value speed (we're talking about a 26-year-old prototype after all), but it has a number of cool letters up its sleeve: it has a contact book, a handwritten note tool, personalized ringtones, caller ID and even access to a internet banking. The stylus, connected to the device by a cable, also seems to be quite accurate by the standards of the time, at least.

Dickson published other photos of the device, including exposing his insides: 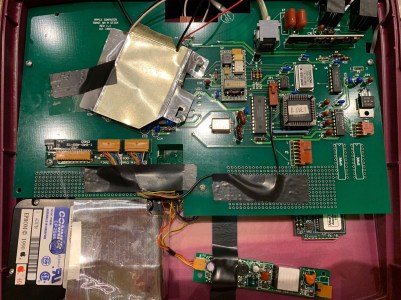 The fact that W.A.L.T. It was certainly ahead of its time, and perhaps that even contributed to its premature death. Good, then, that he can live in our memories through digital records.