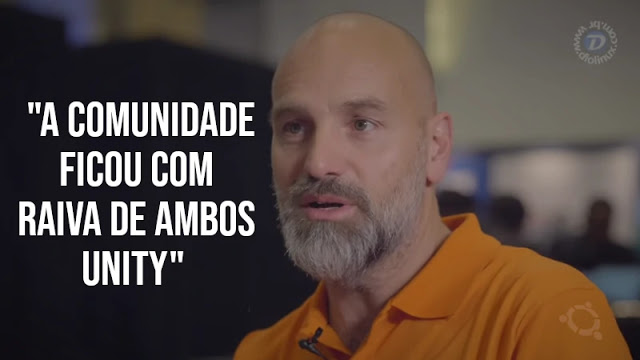 Why did the Linux / Ubuntu desktop fail?

This is basically one of Mark's questions and he talks about the difficulty of facing such a demanding audience, mostly software developers. But why is it hard to please Linux users? It seems that this is related to the malleability and power that Linux ends up giving users who a public who likes to change things, have their own opinions and don't want the same as othershe says. Still on the same subject, Mark states that it is no use arguing and saying that for example: this is the best tablebecause the answer is something like: not the best for me. Indeed due to the plurality of choices in Linux users, we end up customizing / adapting the system to our use, however even if we are judicious I do not see this as a real deterrent. After all, every conscious user has a good sense of what is good for a whole. At least I'm like this and you think so too? ()

About Unity, Shuttleworth says he learned from lio: I thought we were doing a really good job, a great job, but people didn't like to be pressured, so now I think about supporting GNOME, KDE, MATE; and give developers the freedom to choose whatever they want.

Another finding is that Shuttleworth is very fond of Chrome OS, and believes that the success of Linux on desktops was due...we didn't invent anything on the Linux desktop that was very advanced in its time unlike Google with its Linux distro. I love what the Chrome OS guys do, because essentially a futuristic view of the desktop as an extended web, and why they deserve their success, because they were willing to create something that didn't exist in a world where for most people the desktop something that looks like Windows. And in the open source community, we only allow ourselves to talk about things that look like something that already exists and we are defining ourselves as a series of forks and fragments "he says.

The funny thing about Mark's last comment, that this looks a lot like Canonical's current stance, is to realize that he still feels a tightness in his chest for abandoning the idea of ??convergence in Ubuntu. This is evident in an excerpt from the interview, right after saying that the community does not allow new things: "It was something I found very difficult with Unity, because I thought we articulated a vision of convergence … and I think it will happen; And that iOS and Mac will converge. We were ten years ahead, but the community wouldn't let us do that, which is crazy"

But what I find interesting is that the community got mad at both Unity. And I don't understand this behavior.

Maybe I (HenriqueAD) was in a bubble, but even hearing complaints about Unity, in general I always saw him as the face of Ubuntu. I know that outside the Linux world, Unity was something that caught the eye, it was precisely one of the reasons I approached Ubuntu. Another aspect that in fact the community strongly criticized the project of Unity 8, however Canonical gave some reasons, precisely because it postponed its launch several times, creating a suspicion about how mature and good would be the interface. Let us not forget that Unity 8 was sold to us as something revolutionary, the so deified convergence.

I understand that it must be hard to work on something and people criticize all the time, except we give so much weight to criticism that we stifle praise. And from my point of view that was Mark's mistake, of course that his efforts in developing Unity 8 and Ubuntu Phone were creating a hole in the company's coffers. It seems to me that he expected more community and development engagement to embrace the idea, perhaps that would have prevented the river of money wasted on the project. Claim that the community didn't let us do that Something very strong. Good ideas are not always embraced by the masses, but to say that it was the fault of the community sounds very strange to me.

Linux and its fragmentation

When asked about Linux desktop fragmentation of projects that are theoretically redundant, which only one would need (Snap, Flatpak and AppImage are examples given), Shuttleworth replied: I think one of the great things about Linux and free software is that it attracts people who want to be different, who want to change things. That's great, an incredibly ingenious group, but it makes it a little difficult to get what you're asking for, to create something that works for everyone..

Another question asked Mark was about the immense range of Linux distributions, and if only one would not be better. The Ubuntu creator soon replied that this would only be possible if Linux had been closed-source, and would not actually be Linux.

Many people don't stop to reflect how expensive it is to develop Linux, which it was only possible as it is today, thanks to the millions of dollars from various companies, developers and the community. Without it there could even be something similar, but not so gigantic and dominating various sectors and markets like the penguin. Its only apparent failure was on the desktop, and like everything else, we tend to look only at the weaker side of a particular thing or situation.

Below is the English interview with Mark Shuttleworth.

And what did you think about the interview? Continue this subject at our forum