In an app update DJI GO 4 In early 2019, the software used to control DJI drones from lines like Phantom and Mavic had a security feature called NFZ with updated flight zones in Brazil. This change has generated positive and negative criticism by the company's users. Positive for targeting safer drone safety, negative for limiting areas and locations where drones can fly.

In this article we will talk about this kind of drone flight control, which should get tighter and tighter over time.

NFZ = No Fly Zone, or No Flight Zone

THE NFZ (No Fly Zone, in direct translation something like: Prohibited Flight Zone), a feature that aims to manage the locations where the drone can fly, if GPS detects that the location is within a prohibited area, do not let the drone rise. In other areas the software generates flight limitations to keep the drone within the rules, such as not allowing it to rise above 150m in an area where it is bound, even if the user has set a higher altitude limit in the application.

These limitations became stricter with an update released at the beginning of March 2019. The main reason for this is the pressure imposed by authorities following drone problems in Europe at the end of last year. London's second-largest airport has closed for about 4 days, compromising tens of thousands of flights because of a drone. All this days before Christmas, a time with a huge number of flights. This kind of problem has been happening in various places around the globe in recent months.

The Types of GEO Zones

Below is a brief explanation of how DJI delimits its GEO Zones system used by the DJI GO 4 app responsible for controlling its drones.

NFZ is actually a kind of "zone" within the many delimited by the DJI drone control app. She is the most "known" precisely because NFZ means No Fly ZoneIt is an area where it is not possible to raise the drone. But besides that, the app has a number of other zones with limitations for flying with drones, which all users should know about.

Since 2013 DJI has been investing in its software to improve the security issue, especially in the Geofence / Geolocation system. This is a good thing for authorities and professionals, as the popularization of drones will naturally bring about a number of problems related to users' lack of common sense when it comes to flight rules. Since DJI owns over 70% of the world's drone market (2018 estimate), the impact of its products is very large on this market, always with favorable and negative reviews.

In recent weeks many users are no longer able to fly in regions where they could once lift their drones, overnight after the DJI GO 4 upgrade. Is that a bad thing? Yes and no, the old story, many pay for the mistakes of a few, and in this case, one mistake can be potentiated, as the focus is mainly to avoid nearby airport flights.

Below we detail all types of DJI-delimited Zones in your software, and how each of them works and viewed by the application.

There are different types of GEO Zones, which we list below: – Restricted Zones / Restricted Zones: This zone appears red in the DJI GO app, and the user will receive a message that they cannot fly. If you have permission to operate in this zone you can send an email to DJI and grant access, which can be done online as well.

– Altitude Zones / Altitude Zones: In this zone that appears in gray on the map, the user will receive a message warning that the limited flight altitude will happen mainly in urban areas with "helicopter traffic" for example.

– Authorization Zones by Authorization: This type of zone appears in blue color, the user will receive a warning that flights are limited by default. Authorization users may release the flight through an account authorized by the DJI system.

– Warning Zones: These zones may not appear highlighted on the app map, but the user may receive alert messages. Ex. "Warning Zone: Protected Wildlife Area".

– Enhanced Warning Zone: In this type of zone the application will send a message requesting the unlocking with the same procedures as in a "Zone by Authorization" mode, but a verified account or internet connection is not required to proceed with the flight.

– Densely Populated Area / Populated Area: This area appears in red on the map, and serves to inform you that in a normal situation there is a very high density of people in this area, and flight is not recommended. Ex .: In commercial area.

– Recommended flifgt / rea: Finally in green appears all areas where flights can be made without restrictions.

Below is a map of Florianpolis showing the areas close to the city's airport. Notice that there are two reddish "zones" that have a certain sequence, showing what are the runways and landing of the planes.

The two most visible red zones on the map below are restricted zones (Restrictec Zones), just the runways and nearby areas of the airport. As you move slightly further along the continuation of the line, the zone becomes altitude (wine tone). of course), already moving a little away from the restricted zone we have the blue circle, which is a zone by authorization, which is exactly where the location of the trapiche in the picture below where about 1 ms ago I could fly with the drones , but now the app shows as No Fly Zone, with no possibility of flight release for "common" users.

It is possible to make a request to DJI in order to have permission to fly in that area as highlighted above, but a certified account and authorization documents are required.

The notices we received

The app warnings took place in two places here in Florianpolis, which until weeks ago had no reports of drone problems, had restrictions and appeared with warnings in the system.

One of them we purposely cause and "next" to Herclio Luz airport in Florianpolis, exactly 3km away straight from the beginning of the nearest part of the airport, but not on the same route as the landings and takeoffs. 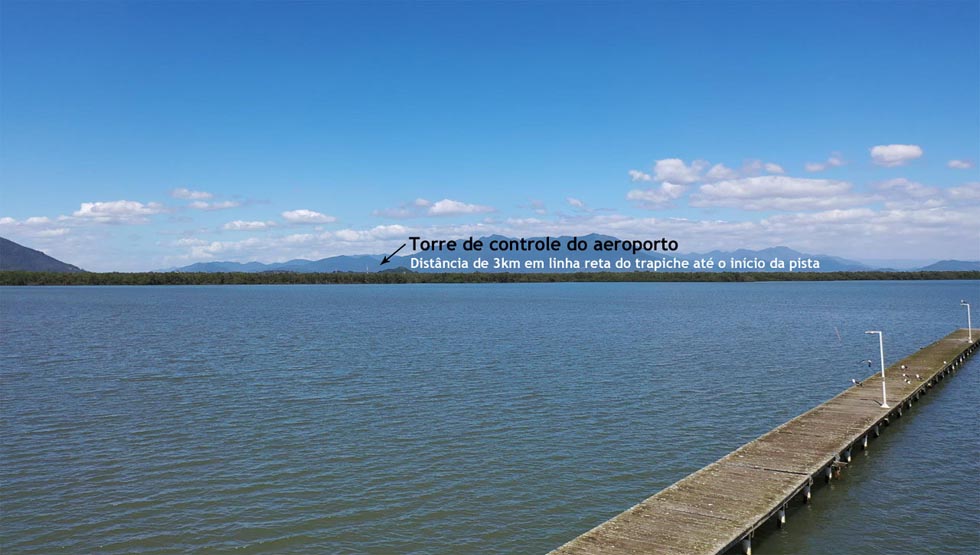 In this place has an area with several "small houses" to store artisanal fishermen's boats, besides a trapiche, very beautiful place. I have no high flights there, just a few to take takes of modes with predefined flights like Circle, Helix etc, just to avoid any problem due to the proximity to the airport, but it is worth mentioning that very far from the runways.

At this location it is currently no longer possible to raise the drone for a regular user without an email account authorized by the DJI app, a "Authorization Zone"in the direct translation, Zone by Authorization. The messages appear as soon as you turn on the drone / control and access the DJI app, making it impossible to fly, first the traditional "Cannot take off", after clicking it directs you to the Status screen where an informative red icon appears in "Overall Status" where we finally get the message "Aircraft is in a No-Fly Zone." as you can see below:

Already the other situation happened on the way to the neighborhood of Itacorubi, at Av. Da Saudade here in Florianpolis. This avenue famous for giving access to the north of the island.

The system blocks the drone on flights up to 150 meters high, fitting it into the zone type: Altitude Zones / Altitude Zones. From the map above it is possible to notice that this zone is a route sequence of one of the aircraft runways and landing, even far from the airport, more than 10km, including hills higher than 150 meters high in the middle of that route, the system defines the location as an altitude zone.

If flying above 150 meters outside this zone, upon entering it the drone would automatically descend to within the stipulated limit.

DJI has been receiving a lot of user criticism from its drones in its forum, not least, since updating the DJI GO 4 app used to control the drones of the company and a number of restrictions that previously did not exist now to happen. Importantly, the updates happen at different times according to the user's country / region, some countries already have similar restrictions to those that were applied to us Brazilians much longer.

In my view a natural process of evolution of this type of product, companies that behave differently than DJI is doing, will have a lot of problems with the lack of notion of some users. It is very important to note that even with a large field of view, it is difficult to make a sound decision in drone control to avoid an accident if you have a small plane or helicopter coming towards the drone, as we can see in the video below.

There is a cool video on the channel JViana Drones on YouTube, there he clarifies several doubts on this subject, it is worth checking.

In BrazilAnother very important detail about Brazilian law, which has no direct link to the DJI database and system. In the US AirMAP has a very advanced process for the release of flights as well as the DJI system when it comes to registered and registered users.

Here the process is not so fast, but it must be done to follow the law. Everything is up to SARPAS, we recommend registration and authorizations to avoid problems, especially if some restricted area flight is required. If you unlock your drone and are able to fly in an area where national law does not allow it, if you do not have proper authorization and registration of your drone, you may have problems such as fines and confiscated drone.

Over time perhaps any zones may have their "classification" improved, as happened in one of our cases that we received the warning here in Florianpolis, where it has hills higher than the defined altitude zone.