Playing on the phone is so routine that people often do not realize how much this activity is part of their lives. If in the past the snake game was the addiction of the crowd, today there are so many options available that it is difficult to choose one. Therefore, defining among the best games among all existing is not an easy activity, especially when it comes to the iOS system in question, ie iPhone or iPad games.

Mobile phones have become true consoles and game developers have realized their fundamental importance to people. Mobile phone games are just as important as video game console releases like the Playstation and Xbox just look at the fever that was released from Pokmon GO.

In this immense range of available possibilities, some games stand out and gain more attention from the crowd. Here are 5 cool and free iOS game options that you can play with your friends, and see all your goals and more.

This game has become incredibly popular among the most diverse ages, winning a large audience. In it, the character runs away from a guard after being caught graffiti on a subway, must run along the tracks and pass through various obstaclestaking shortcutsseeking to get rid of their stalker.

The incredibly well designed game and works a lot with player attention, who needs to keep an eye on when to change tracks, jump on trains, dodge boards, among many other challenges that make himDynamic and extremely addictive.

You can also buy characters with the purchased coins, more effects to increase their game longevity, improve the board used for jumping obstacles, different clothes and other features specific to the country being represented at that time of the game.

The game is one of the best iPhone or iPad games for those already familiar with other iPhone games, so be sure to try this completely free option on iOS on your device. 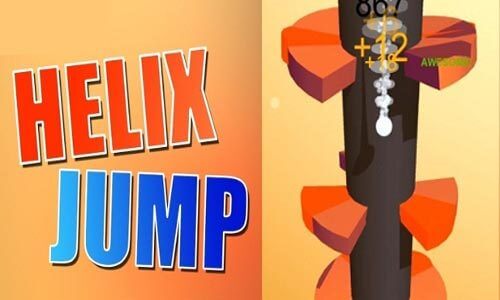 Although it sounds like a simple game, Helix Jump can hold your attention a lot. In it, a ball bounces through a maze of the propeller tower, and the goal is to jump with it through the spinning propellers. There are several levels and the difficulty increases, as you advance.

Helix Jump is the typical game in which you are not concerned with a story or something, but with your ability to get the ball not to hit the blades, challenging yourself more and more to pass the level.

It is one of the best games for those who want to distract their heads on their iPhone or iPad, because it is already on the screen, without a story to be deciphered, you can open and ready, start playing it.

This is a well-known role playing game with many fans. Arena of Valor is the western version of Kings of Glory, a famous game in China that can beat the League of Legends in Brazil.

One of the features that make Arena of Valor a very well-known game to presence of famous characterswhere you can choose to play even DC heroes. Also, choose to play alone against another player or form groups of up to 5 components in a real match– all this on your phone.

It is a great advantage that you can play the classic 5v5 MOBAs straight from the phone, which attracts many players to the Arena of Valor and has kept it among the most popular. It is perfect for those with iPhone and iPad, where you can see everything more clearly, play with your friends in one session together.

Yes, you are a person addicted to The Sims can play it directly from your mobile phone. The game was in a trial version in Brazil during 2017, available only for Android, and finally released its official version, also available for IOS.

Dismissing presentations, The Sims Mobile is very similar to The Sims 4. In this real life simulatorYou can create and develop a character, letting your imagination take control of his life. It is a game that many people enjoy, known for having many downloads in the app store, mainly for being a classic of the 2000s.

You can also interact with different users, whether they are your friends or not during the game, you can enter other created cities, interact with other characters, customize clothes, houses and all places within the game, just use your creativity, money earned and Sim's energy availability within the game. Remember that I also need to manage the needs of sims, be it their hunger, sleep, need for cleaning, conversation with others and much more.

Being a game loved by so many people, it was a big draw for the game developer to release the mobile version, adapting to the new needs of society and understanding that this is a way to keep the franchise alive. That's why he is on the top 5 list to play with his friends among iPhone games.

Fortinite is one of today's most famous multiplayer games., having been released last year and winning its mobile version this year. In the game, 100 players are cast on a map to compete to the death, and the map decreases as the game progresses and players are killed..

The mobile version is not an alternative version, but rather an option for gaming addicts, as even if you are using your phone, you will be battling with players accessing your PC, PlayStation 4 or Xbox One.

Although the game is free, possible to buy credit, to customize clothes and other items, increasing the range of options for those addicted to the game. It's a very successful game between iPhone or iPad users in the app store, so it's in the top 5 on a list.