Announced in June 2019 at WWDC, macOS Catalina is the 16th major operating system update, and is also the successor of the 2018 macOS Mojave. Whenever a new major system update is released, it is common for many users to rush to find out how to upgrade. your own MacBooks and devices.

However, a new update does not always mean that everything will be improved, especially in the first months of release. Check out some of the main reasons not to download macOS Catalina and expect small bugfixes to be made to the operating system version.

To get started, one of the main issues regarding this update occurs from the application.Mail – ie the macOS email application. When upgrading to Catalina, many users received a confirmation message that all data and emails were properly transferred to the new version.

However, in many cases, this is not true. Several users have already reported that they had deleted many of their data with the transfer to the new version of the operating system. Even though it is possible to recover the content through a Time Machine backup, the indication for advanced Mail users will not download macOS Catalina.

2. Failure to use eGPUs

As a somewhat less common issue that affects a smaller portion of MacBook users and owners, but still as serious as that, we can highlight the flaws with the use of eGPUs – ie external graphics cards. According to reports in the eGPU.io forum devoted to the subject, several people have already experienced errors using them in macOS Catalina.

Among them, most point to problems when an external monitor is connected directly to eGPU, causing it not to turn on, constantly rebooting or freeze the image lock. Therefore, if you use eGPUs, it is recommended to wait a while and not download macOS Catalina.

If you try to run some older applications after downloading macOS Catalina, you probably get a message stating that ?the application is not optimized for your Mac and needs to be updated.? The problem with this version of the operating system does not support 32-bit programs. .

In fact, Apple has been decreasing 32-bit application compatibility over the last 10 years, so MacOS Mojave was the last to support these apps. The only way to solve this is by downgrading to macOS Mojave or by looking at whether the application in question offers a 64-bit version or, unfortunately, opting for an alternative to it.

4. Mac won't turn on after upgrade

Another serious issue reported by many users is that, after upgrading to the new version of the operating system, their MacBooks simply cannot boot the system anymore. As you can imagine, this is a serious problem, although it mainly refers to incorrect or corrupted installations and is not extremely frequent.

However, if that is not enough to convince you not to download macOS Catalina, we recommend at least backing up your documents and files before attempting the upgrade. That way, if something goes wrong, you can recover.

Article Tip: Attention iPad does not work as a second screen on all Macs

Another common problem for people trying to upgrade is that the system upgrade simply hangs. With that, a lot of people think that something common, thinking that it can take so long for the update to be complete.

While it does take a while, if your Mac spends hours on the update screen or even on the "Setting Up Your Mac" screen, it may indicate that the upgrade simply crashed. To avoid problems and fix, before you install back up your documents, and if so, press and hold the Mac power button to turn it off and try again. 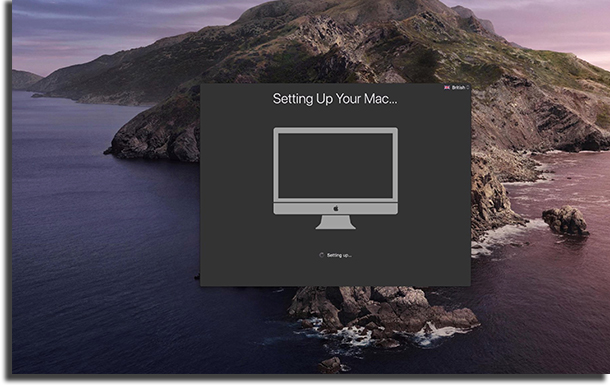 If you work as a music producer, DJ and use applications that read XML files, we recommend not downloading macOS Catalina until developers update their applications. This is because, with the 16th version of the system, support for iTunes, as well as reading XML files is terminated.

Meanwhile, several music production applications such as Rekordbox and Traktor are used by various DJs to read XML documents. If so, you will surely want to wait a little longer.

Some users are complaining that when upgrading the operating system, the Mac often starts asking them to update their Apple ID settings. And in that case, even if you enter your login and password correctly, the same message can reappear within minutes – which, as you might imagine, can be very frustrating.

Fortunately, this is a bug that can be fixed if you save your passkey directly to iCloud. Even so, as the procedure may not be very intuitive for various users, the best option is to wait until they release a patch package to resolve this.

Finder is a native Mac application that keeps running in the background at all times, allowing you to find your applications, organize documents, media, folders, and various other files.

With the update for macOS Catalina, users are reporting that often their shortcuts to third party (non-native) applications are disappearing from Finder search. With this, users must access the application directly from the root folder.

As one of the main reasons for not downloading macOS Catalina, it is important to consider that several users have reported that their devices have slowed down or started to overheat after the upgrade.

Especially for older MacBook models, this could be because the new version of the system brings features that require a little more processing. So if your MacBook is old, you can still test the system update, but we recommend backing up your files in case you need to revert them.

10. Cannot connect to WiFi or Bluetooth

As one of the biggest issues with upgrading, some users are having trouble unable to access the internet or pairing with Bluetooth devices after installing macOS Catalina. Fortunately for many (but not all), this error can be fixed by the user with a few steps.

The first way is simply by right-clicking the WiFi icon and turning it off, only to turn it back on after at least 20 to 30 seconds. Regarding Bluetooth, just follow the steps:

We hope this article has helped you learn about some of the major issues users are facing when upgrading to macOS Catalina. However, it is worth mentioning that this is not uncommon for the first few months of the update and, depending on when you are reading, several of these errors may have already been fixed.

Also check out our content explaining that iPads as a second screen don't work on all Macs!